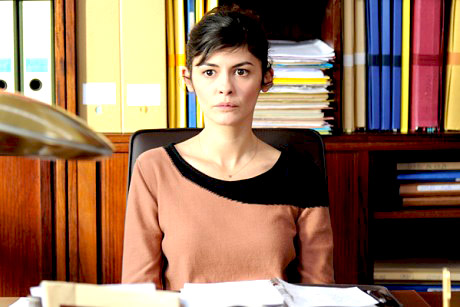 Delicacy is a full-feature directorial debut of French novelist David Foenkinos, adapted from the book he wrote in 2009 and co-directed with his brother, casting director, Stéphane Foenkinos. Subtle, touching and impassioned, yet also wackily hilarious at the most surprising instances, this French comedy narrates the story of Nathalie (Audrey Tautou), a single woman in her forties. After three years mourning over the death of her beloved husband François (Pio Marmai), Natalie gradually allows herself to move on and succumbs to a newly emerging relationship with her Swedish co-worker Markus (François Damiens), who could not be further from the alpha-male of every woman’s dreams.

One of the biggest pleasures Delicacy offers is to observe Audrey Tautou in a much more matured and emotionally ripen lead role, allowing her brilliantly insightful acting to carry the whole drama of the biggest loss anyone can imagine on her fragile shoulders (in fact, so conspicuously fragile that at times I would get distracted wondering if enough catering was provided on set). The inner strength and dedication of Nathalie is tastefully embellished by a twist of childlike naivety and trustfulness which Tautou brings to the role, reminiscent of performances of the only other Audrey you can think of – yes, Hepburn.

Although Delicacy speaks about very profound, overpowering and painful emotions, its main subject of investigation is the complexities of continuing to live after you know that your one and only is gone forever; the film chooses to present it in a light-hearted rather than poignant manner. With its revitalising soundtrack, creative transitions between time passages, attention to detail and adequately paced storytelling, Delicacy offers a light-hearted and often comic backdrop to the tragedy which is subtle enough not to sabotage the sense of its initial seriousness. The situations that Nathalie and Markus end up getting themselves into are funny and teenage-sort-of-embarrassing, whereas the emotions they feel appear truthful and real – this balance is the film’s strength.

However, watching Delicacy you might also catch yourself smirking – “things like that only happen in movies” – yet will immediately be shown why it only happens in movies as the film rapidly moves on to illustrate how awkward it would be if it actually happened. Although such meta-game is entertaining, at certain points it feels like the comedy out of these little awkward moments is slightly over-milked, even if in a deliberate and self-knowing manner.

This is especially true about Markus’ character, who is responsible for most of the embarrassments that occur in the film. He is no-one special, definitely not a man that women dream of ending up in a relationship with – we get it, a point made quite clear – but the film is only a step away from depicting him as a weirdo. The ending (which could have been used to better explore Markus’ character, but is chosen to remain focused on Natalie) feels slightly watered down as well; yes, it leaves you with that warm feeling inside, but all the i’s have already been dotted.

In conclusion, Delicacy is a well written romance with an overall gayness, which comes so naturally only to French comedies. Needless to say, if you’re a fan of Tautou, you’ll love it. The message it delivers in a lightly entertaining and non-didactic way is a very useful reminder as well (especially for all the singles out there!): even when it seems like the best relationship of your life has ended, there’s always the next one to come –  and it doesn’t necessarily have to be with Mister Perfect. Loving is easy, once you allow yourself to.

Watch the trailer of Delicacy here