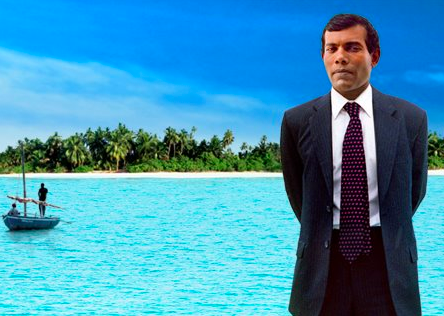 The Island President is a powerful and eye-opening film portraying one country’s struggle against destruction.

While the rest of the world worries about declining economy, falling inflation and rising prices, the Maldives is fighting for its survival. According to scientific predictions, if carbon emissions continue as they are, this tiny country made up of 2,000 islands that are only metres above sea level, will be submerged under water within a decade.

The Island President transports you to a troubled paradise, a visually stunning picture of natural landscape, juxtaposed with the inevitability of its extinction under rising levels of the Indian Ocean that surrounds it and is framed by its history of political turmoil.

The film begins by using archival footage to trace the difficult past of this island of contradictions. The clear blue waters and fine white sandy beaches of the Maldives create a Mecca of serenity and relaxation for the rich and famous. Yet it is these same waters that wash along the shores of the island’s political prisons and torture shacks that were used under Maumoon Abdul Gayoom’s 30 year dictatorship.

In 2008, after 12 years of fighting for democracy, a period in which he faced 12 prison sentences and two stints of torture, Mohamed ‘Anni’ Nasheed overcame the overwhelming odds to win the Maldives first truly democratic election.

The film follows Nasheed’s first year in office leading up to the 2009 Copenhagen Climate Summit. A truly worthy protagonist in the fight against global warming, Nasheed has become an environmental crusader attempting, with all his heart, to combat the rising sea levels by appealing on the most basic human level to none less than the world’s greatest powers: China, Brazil, India and the United States. Recognising his position as an underdog, Nasheed understands the Maldives hold little clout, yet he also comprehends with every fibre of his being that without the help of these superpowers the Maldives will be the first, but certainly not the last, country of environmental refugees. His task is no small feat, especially when there are many who shake off global warming as a conspiracy, yet it is Nasheed’s unshakeable determination, optimism and incredible charisma that have propelled him to become a leading figure in the fight against carbon emissions.

Film-maker Jon Shenk, accompanies Nasheed and his entourage from country to country, showing both public and private encounters. This mix of formal interaction and plight with intimate scenes showing Nasheed fixing his tie before the summit, eating dinner at home with his wife, expressing overwhelming frustration and biting into a burger in New York City gives the film its genuineness. Far from the rational and scientific presentations of global warming, The Island President allows us to see the human feeling – the frustration that emerges from knowing that people’s lives are in danger, yet still, countries such as China and India do not want to forfeit their commercial and industrial growth.

The film’s opening at the Curzon Soho on Thursday 22nd March marked a bitter sweet moment. The issues within are now increasingly topical and sensitive as on February 7th, just over a month ago, President Nasheed was deposed by a coup d’état as opposition leaders collided with the former regime and police, and created a national security mutiny. As the shaky and unstable political situation envelopes, the climate issues Nasheed was campaigning so strongly for are forced to take a back seat. What this means for the country’s future is unsure and honestly, a frightening thought.

Find a link to the screenings page of the website here.

Watch the trailer for The Island President here: