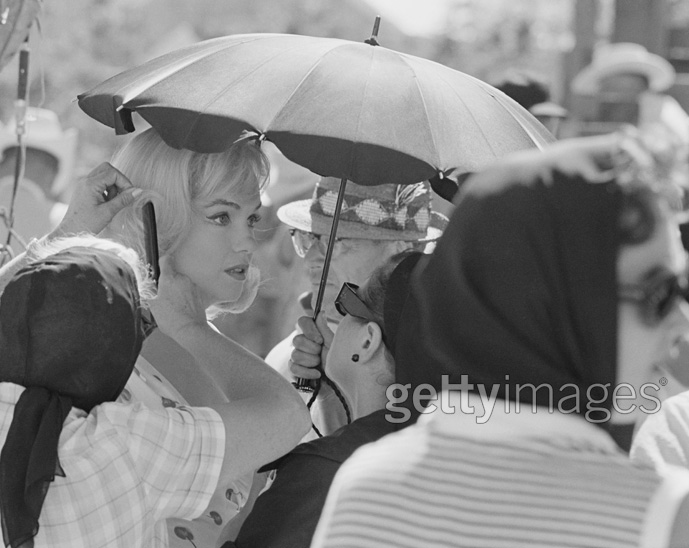 Having recently read My Week with Marilyn and listening to Nicki Minaj’s Marilyn Monroe on permanent loop, it seemed pertinent I paid a visit to the current Marilyn exhibition at the wonderful Getty Images Gallery in London.

The new exhibition charts Marilyn Monroe’s rise from aspiring actress to the status of ultimate Hollywood icon. Gallery director and curator Louise Garczewska has drawn on a wide range of archive photos – many of them rare – for the show which marks the 50th anniversary of Monroe’s untimely death. Alongside the images there are also rare video footages on display and a stunning selection of original dresses and costumes, all designed, made for and worn by the legend herself including the collection of David Roberts Gainsborough. This is the first time they have ever been shown in London. The sum effect for the visitor is an unrivalled glimpse into the life of one of the world’s most famous stars.

Garczewska was keen to stress that the exhibition is a celebration of Marilyn Monroe’s life rather than a commemoration of her death. Each image on display exemplifies Marilyn’s beauty, her fabulousness and her role as a singer, model, actress and icon.

Garczewska pointed out the purpose of the exhibition: to show the other side of Marilyn Monroe, not just the film-star and bombshell, but also to explore the person behind the image. This is something which can only be achieved through the medium of photography, as it allows the photographer to work in the moment, undistorted by personal perception and interpretation. So, alongside iconic images of the Hollywood star you will also find a large selection of more candid shots taken in everyday life. Some of the photographs which best serve to show the real Marilyn are those by Baron who it was said had a close personal rapport with Monroe, something which shows in her relaxed and at ease poses.

One of the nicest sets of images on display are those from the Michael Ochs collection, taken at Grand Central Station in New York in 1955. The photographs show Marilyn Monroe taking the subway. Said to be unposed, they include a shot of the star waiting for the train on the platform in, perhaps, that ultimate of New Yorker poses: standing close to the platform edge, slightly bent forward with gaze turned down the tunnel, impatiently awaiting the next train. “What do you wear in bed? Chanel No. 5” triptych, which depicts Marilyn laughingly spritzing herself as she stands at her vanity – also fascinating.

Amongst the collection of original dresses and costumes on display are outfits from Marilyn’s great and iconic movies such as Gentlemen Prefer Blondes and Some Like it Hot. Apart from their storied history and background, they are interesting to look at, as the styles and shapes of the dresses and costumes show the curvaceousness of Marilyn’s much lauded figure and how that figure and her image have inspired many of today’s greatest music stars, most notably Madonna.

According to Garczewska, what amazed her about the exhibition was the sheer cross-section of interest, of people who had visited so far. From all ages and all walks of life, covering the entire spectrum, this stunning exhibition has, without a doubt, proved that her universal appeal shows no sign of waning.

There are not, or never have been, many individuals who have inspired such interest and this is what truly marks Marilyn Monroe as one of the greatest icons of our time. The Marilyn exhibition is a must see for all.

Entrance at the gallery and exhibition is completely free, making it accessible to everybody and each photograph on show is available to purchase in the form of an image hand-printed from the original negatives, with prices starting at just £65.