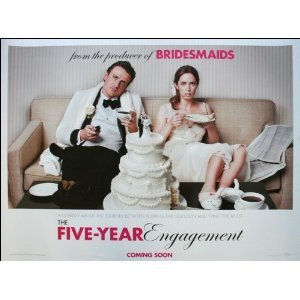 The latest offering from the Judd Apatow comedy conglomerate is The Five-Year Engagement. It teams up regular collaborators Apatow, Jason Segel and Nicholas Stoller. It’s the first time since 2012’s The Muppets that Segel and Stoller have written together.

The plot follows Tom (Jason Segel: The Muppets, Forgetting Sarah Marshal) and Violet’s (Emily Blunt: The Devil Wears Prada, The Adjustment Bureau) relationship over the course of five years, and then some. At the start of the film the couple gets engaged but, for a number of reasons, the wedding is constantly postponed. Due to an unexpected pregnancy, Violet’s sister gets married before her and a job offer uproots the couple, leaving Tom unhappy in their new home town.

One of the most striking aspects of the film is that it is tonally all over the place, both in terms of comedy and emotion. The comedy ranges from broad slapstick (Emily Blunt running into an open car door) to gross out (Chris Pratt pretending a carrot covered in yogurt is his penis) and more mainstream fare (the admittedly very funny Elmo/Cookie Monster exchange). It is evident that the script was written by committee – the whole film plays out like a mash-up of two or three different types of comedy. This is somewhat jarring when combined with the more serious moments in the film. The most obvious example of this being the scene in which Emily Blunt is trying to save her relationship but is sick in her mouth and is forced to swallow the effluent.

The pacing of The Five-Year Engagement is the biggest problem and it’s 124-minute running time is emblematic of the current trend of making films unnecessarily long. That works out to be just under 25 minutes a year. Citizen Kane tells an entire life story in five minutes less. There are so many extraneous scenes that contain neither mirth nor plot. The film starts off moving at breakneck speed – a pregnancy passes by in the blink of an eye. However, by the time we reach the five-year mark the pace of things slows down agonizingly. Even worse is the fact that when the story feels like it’s reaching its natural conclusion, it is dragged out for at least another 20 minutes. A shorter, snappy cut of the film would have been very welcome and would have improved it immeasurably.

The Five-Year Engagement suffers from many problems but would have been insufferable if it was not for its cast. Segel and Blunt are warm, likeable and believable as the central couple. Their sense of comic timing and feigned awkwardness really elevated the funny moments in the film. They managed to make the viewer care about their relationship where the script had failed to do so. Chris Pratt (Parks and Recreation, Moneyball) as Alex was positively hilarious in his more restrained scenes but let down by having to spout dick jokes every other appearance. Alison Brie (Mad Men, Community) makes the step from TV to silver screen faultlessly and shows promise for the future. If it were not for such strong performances and on-screen chemistry from the cast, The Five-Year Engagement would probably have been an abject failure.

One issue that is a little unsettling is the treatment of East Asian characters in the film. The only East Asian female is reduced to a gold digger with no lines of dialogue and a mild racial joke is made at her expense. Ming, a minor supporting role played by Randall Park, speaks of “acceptable racism”. Despite supposedly being the most able grad-student at university, he speaks in heavily accented, broken English and is played as an idiot.

A very interesting point about The Five-Year Engagement is that it is being marketed as “from the producer of Bridesmaids”. This is obviously an attempt to sell the movie to a female audience. Considering that the writers also worked on Forgetting Sarah Marshall and The Muppets and Judd Apatow’s other mega-successful comedies are conspicuously left off the poster.

The Five-Year Engagement is somehow better than its constituent parts. It suffers from a lack of narrative focus, being too long, and lacking comedic restraint. A strong cast tries its hardest to save the day but cannot dampen the mediocrity. A great deal more is expected from the makers of The Muppets but, sadly, it is not delivered. However, when compared to other recent big comedy releases such as Jack and Jill and The Zookeeper this is a masterpiece. Judging by the howls of laughter from certain corners of the screening room, this movie will find an audience, but the majority will be left wanting 124 minutes of their life back.

The Five-Year Engagement is released nationwide on 22nd June 2012.

Watch the trailer for The Five-Year Engagement here:

★★★★★
Sean Gallen
Read More
Scroll for more
Tap
Battle of the sexes: This is What We Do for a Living by Tumble Circus at Southbank Centre | Theatre review
The Hickey Underworld at the Barfly | Live review