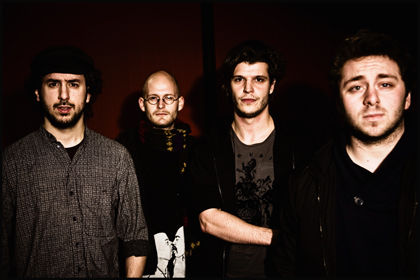 A few months prior to the September release of their second album, Belgium four-piece The Hickey Underworld whirled into London for two brisk support shows. “I’m Under The House I’m Dying” is due for release in September.

Supporting Southend’s Baddies at Camden’s Barfly, The Hickey Underworld took to the stage before a pretty meagre crowd, but still managed to thrum up something of an atmosphere.

Much of their sound stays safely close to the heavy-riffing, Fugazi-shadowed vein of post-hardcore rock music. Tracks in this style are propelled by drummer Jimmy Wouters’ thundering rhythms, his arms appearing to multiply as he thrashes behind the rest of the band. It’s the kind of playing that makes it seem a miracle when the kit emerges intact at the end of the set. Black-bearded singer Younes Faltakh howls and yells over the top as the guitarists strum frantically alongside; at Barfly, the balance between the instruments hadn’t quite been achieved which occasionally gave the impression that Younes was rocking out solipsistically behind a sheet of soundproof glass.

The first half of the set was dotted with heavy tracks from their first, self-titled album. The band kicked off with Flamencorpse which stomps along for much of its course like an ugly troll, while occasionally picking up more promisingly varied melodic sections. Mystery Bruise thumps off in a similar fashion, with Younes screeching over the top like the lead singer of a hundred different rock bands. These earlier songs moved between generic foot-stomping heavy sections and unexpected outbreaks of something quite different and unusual, like coming across a forbidden gem in dark dripping caverns you’ve explored myriad times before.

The songs they played from their new album, the intriguingly-titled I’m Under The House I’m Dying, suggested that they are moving towards a greater exploration of the interesting aspects of their sound. New single The Frog is a menacing juggernaut that pushes you relentlessly before it then suddenly dissolves into something swirlingly ethereal, without ever losing its menace. Threatening voices drift in and out and the inventive experimentation brings to mind early Flaming Lips and Deloused-era Mars Volta. The Frog is damn cool and far more interesting than anything they played from their first album.

Another song suggesting a move into fascinatingly odd, psychedelic terrain was the lengthy, exploratory Cold Embrace. Taking up a good ten minutes of their short set with a very experimental track was a brave decision and a good one – the sudden outbreak of strangeness after quite a few, fairly predictable heavier tracks caught the small audience’s attention and fired them up for the weird-yet-catchy highlight of The Frog.

It was a promising set and it’s certainly possible that The Hickey Underworld’s name could become quite widely known (in certain circles) if they continue to evolve as interestingly as their show at Barfly suggested they have. They also have an engagingly offbeat stage presence, appearing immersed in their music while also throwing out something unexpected from time to time – Younes wandered off the stage and played amongst the crowd for a short spell. It was a much more interesting and engaging performance than Baddies, who they were supporting.  I will be curious to see if their name floats into many magazines and websites over the next six months. Their eponymous debut album is out now; I’m Under The House I’m Dying is due for release in September.

Listen to The Hickey Underworld’s new single, The Frog, here