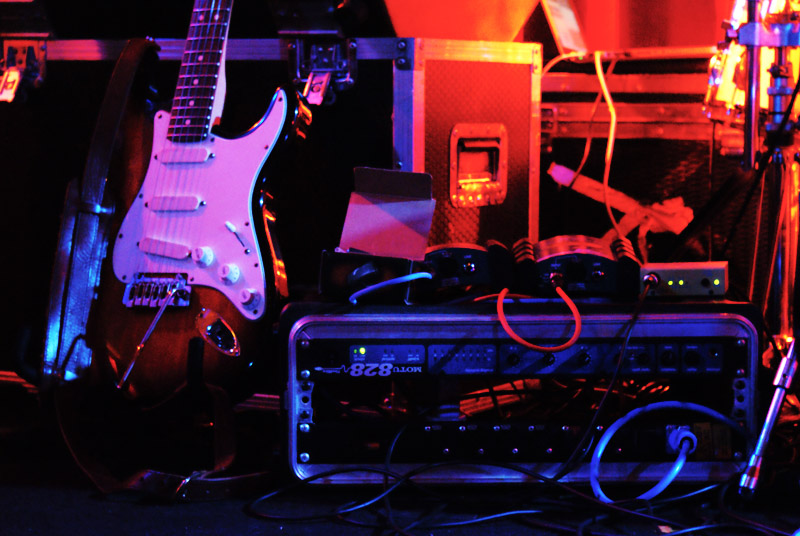 Bush Hall is a stunning venue – a large space for an intimate audience, engraved with lavish decorations with warped mirrors hanging on the walls, creating a trippy effect. The lights are dim – that “perfect first date” kind of dim. The stage isn’t much bigger than a bus stop but a red curtain drapes behind it, only adding to the lavish atmosphere of Bush Hall. A little after 8pm, a small crowd developed, and it becomes clear that Sweet Billy Pilgrim (SBP) attracts an audience of different ages, from trendy teenagers to adults just coming from the office to people in their 60s and above. Before them, however, were support band Revere, who despite a number of technical difficulties, managed to play a decent warm up. They’re an ambitious seven-piece, complete with electric violin and cello, and in the magnetic These Halcyon Days invite The Strangled Brass onto the small stage. Regardless to say, this band plays loud, vivacious music. Their best, We Won’t Be Here Tomorrow, perfectly encapsulates their infectious pop sounds. Despite the backing singers’ microphones not working and not enough volume from the guitars (and they knew it), they maintained their determined stage presence, even if they were slightly unpolished overall.

By the time Sweet Billy Pilgrim stepped on stage, there was a noticeable rise in audience. A hundred or so gather around – crowded but not stuffy. SBP did not disappoint this dedicated gathering, they played a surprisingly well-energised performance that left the audience with grins on their faces. The band originated from Buckinghamshire in 2003 with Tim Elsenburg as lead singer and guitar, Alistair Hamer on drums and Anthony Bishop as bassist. Already with two releases out, they then hired the talented Jana Carpenter to work with them in 2010. Along the way they’ve been featured on Channel 4’s The IT Crowd and their album Twice Born Men was a Mercury Music Prize album (2009). Like Slaughterhouse 5, the book that inspired their name, the band has proved to be as musically smart and funny in person.

They started with the song Joyful Reunion, and as the name suggests, it’s a cheery number; it put the crowd at ease and they all began to dance. The vocals of Bishop, Elsenburg and Carpenter fit harmoniously well, and it’s clear that SBP are a band who genuinely enjoy performing together – Elsenburg at some point said cheekily: “We do it for the love”. Archaeology is a turning point. It’s a sadder, slower song, but complicated and intricate so the audience didn’t lose focus. Kalypso and Kracklite are enchanting, the former a little more mystifying, and Elsenburg’s vocal range and hold was illustrated best when they were performed. They even include a quaint version of Whitney Houston’s I Wanna Dance With Somebody, and the whole crowd had big smiles on. “We used to rehearse that before she died, so it’s not in bad taste” said Elsenburg and another band member shouted “It’s still in bad taste”. There were also some technical difficulties as Elsenburg forgot several times to plug his guitar in between changes, but unlike Revere, the rest of the band expertly fills in the spaces – drummer Hamer brings out his camera for a panoramic photo of the crowd and they obliged with V-fingers for him.

They end with Blue Sky Falls, a perfect song for audience participation and indeed Bush Hall is filled with “Oh my God, it’s all the same” which repeats until the end of the song. They come back for an encore, playing “an experiment” of Truth Only Smiles, which leaves the audience in a happy, hyper mood. SBP’s performance was compelling, a smooth mix of experimental rock and indie pop that gave their fans what they wanted and more. If anything, SBP should win an award for playing with sincerity and being truly attentive to their audience.