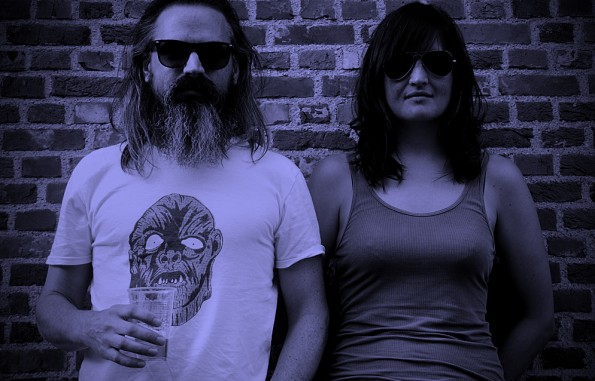 Opening with Seer, Moon Duo set the tone for an enigmatic performance at the acclaimed Rough Trade East last night. Erik “Ripley” Johnson’s vocals are edgy and distorted: hard to hear over the stripped down, raw, Rick Rubin-esque production. Their live performance was as gritty as their records: they clearly want to retain the rough, almost unnerving aesthetic which can be heard on their LPs. The female keyboardist, Sanae Yamada, head-banged throughout the set, creating an androgynous exterior that matched that of Erik’s. Both of them look like they are from the Hendrix era, that clearly defines many of the psychedelic guitar solos. But this is part of Moon Duo’s mysteriousness. The difficulty to decipher Sanae’s look during the performance matches the somewhat unrecognisable vocals and echoing, sometimes screeching, guitar playing.

Mazes, was of course focused on during the performance, which features long, repetitive, meditative, intervals of guitar riffs. During these intervals, the peculiar yet encouraging partnership can be noticed in Moon Duo’s playing. They constantly exchange insouciant glances, the occasional smile and everything seems to collide perfectly, no matter how gritty and lo-fi the production is.

Speaking to Sanae after the gig, she mentioned how much she loves Rough Trade Records; that is of course no surprise – their uniqueness fits perfectly in that independent niche.

Moon Duo’s next release will be available this fall, for more information click here.