We’ve all asked the question as children: “Why can’t men have babies?” but Joe Penhall goes one step further and asks, “What if they could?” Then he places it centre-stage of the Royal Court. 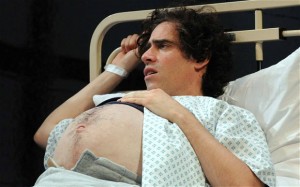 The audience is asked to suspend their disbelief from the off and after the initial jitter of seeing a pregnant man, they settle promptly thanks to a wonderful Stephen Mangan (who plays Ed), looking very much at home with his enormous nine-month bump. The couple on stage are opposing and cold towards each other, bringing home that a baby – whether carried by man or woman (in this futuristic piece) – can not only have an adverse affect on your body physically, but can also be emotionally scarring. Mangan delivers a horrifyingly descriptive recollection of his son’s birth and recoils at mentioning the disgusting bloody afterbirth and how he was invited to keep watching this “midnight blue” human come protruding from his wife. If you haven’t had children yet, that monologue alone would put you off.

Lisa Dillon plays Lisa struggles vocally to deliver any power in her confrontation with the casual and calm African nurse, Joyce, (pitched perfectly by Llewella Gideon) but her diminished maternal instincts (because of her traumatic first and only birth) are crushing to see her subtly struggle with. There are some touching revelations that come sensitively and appropriately, revealing that there is a deep love between the two but they’ve lost themselves in babies and life after marriage.

Penhall never writes many characters in his plays. There’s always a focus on two or three with an interrupting character to guide the scenes. After having seen Haunted Child, another new play by Penhall, at the Court this year there was a static tendency in the lead females’ dialogue and I think it has happened again here. Dillon doesn’t seem very comfortable with her text and whether it’s the text itself or her grasp of it, is open to debate. However, Mangan makes up for any little lull with a superb energy and animalistic, ape-like long arms and slouches as the bump pulls his weight forward. The natural stance he ponders around the room with and the pitch of his mood swings are excellent and at times purely hilarious.

The concept of the play is thought provoking and definitely worth a visit. Louise Brealey’s nurse (Natasha) compliments and supports the focus couple warmly, and the make-up of the prop bump is crafted so well it is utterly believable and convincingly revealed throughout. Oh, and we all love a little dig at the NHS, which Penhall teases us with sufficiently enough. Do catch it if you can.

To book for the last week of Birthday visit here.