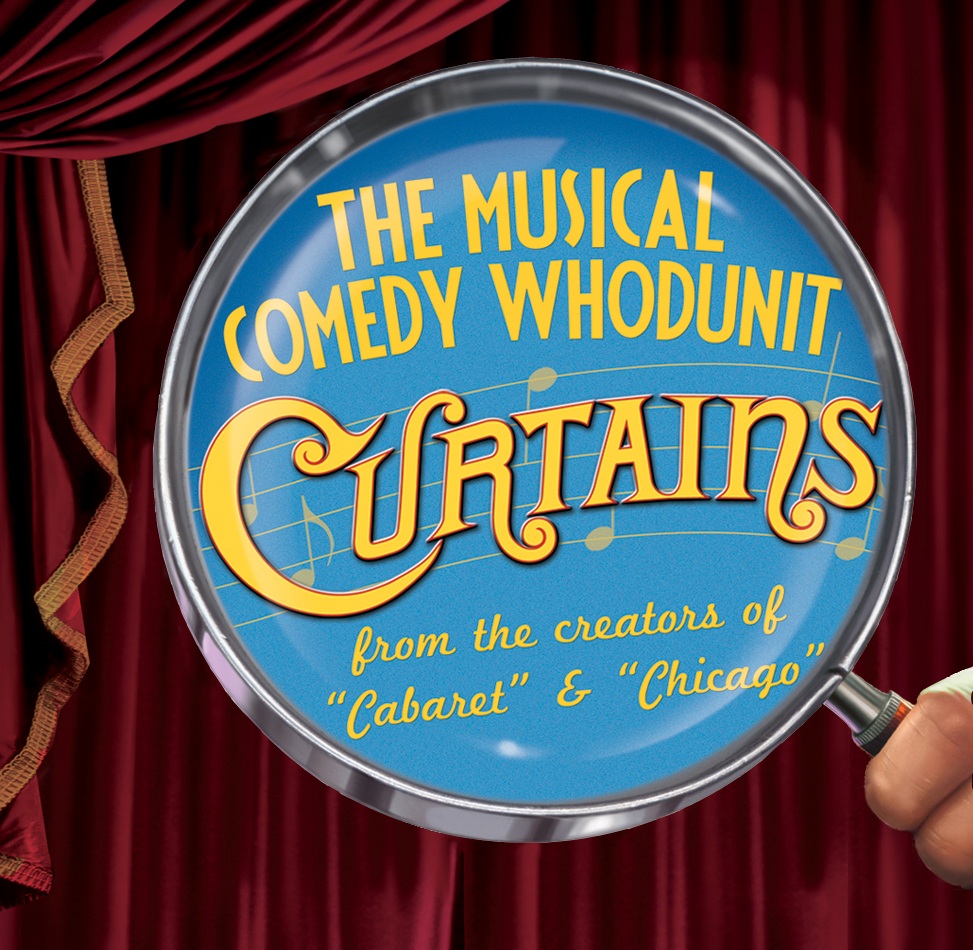 The backstage of a theatre is a place of intrigue, of plotting and vying for the limelight and where everyone has a secret. It’s the 1950s, and in a small Boston theatre, onstage is a faltering musical, while offstage it is murder, with cast and crew being picked off by one of their own. Even then the show must go on. Enter a stage-struck detective, rehearsals and rewrites, and the stage is set for a classic whodunit, delivered with comedy, romance and every excuse for a song and dance routine. Created by the producers of Cabaret and Chicago, Curtains includes equally crafted and intricate songs which interweave parts and characters. Curtains is more intimate than those other shows, and omits their dark edge and layers of subplots and interpretation. The writing expertise keeps the plot tight and the tone upbeat, even in the more wistful numbers. From the moment the leading lady croaks on opening night, the pace is fast, highly energetic and thoroughly good-humoured.

The production is a miracle of space, suggesting the wider spaces beyond, even managing to include a dream dance sequence. Choreographed into the tiny venue are the backstage shenanigans, the play and rehearsals, and the dance numbers – even the high kicks. There are plenty of laughs – an early song mocking theatre critics had a room full of them giggling on press night, and there are several devastating one-liners expertly delivered, especially by Bryan Kennedy as the camp director Christopher Belling, who inhabits the part with relish. Giving as good as she gets is the gutsy dame of the musical, Buster Skeggs as Carmen Bernstein, delivering another great part for the thankfully obligatory mature female character part in a musical. Jeremy Legat as the dorky Lieutenant Frank Cioffi pulls all the threads together with the charm of an old-school leading man.

If you love those old Hollywood movies where the guys and gals put on a show but all the action is really backstage, Curtains manages to jam in about every reference possible. Sometimes you know what is coming, but it’s such a delight to see it unfold. Why not use every trick in the book when they work? The audience feels in on the jokes, and still has surprises with the twists and turns of the plot. It’s a delight when the onstage and backstage stories merge into each other. The Landor, specialist in musical theatre, is an intimate venue – another way of saying fairly small and warm. In such a play with so many musical numbers, it’s a theatrical treat to be so close to the performers. Real singing, real dancing, chorus girls and boys, comedy turns, costume changes, romance, murder and props – it’s not new, but it is an innovative angle to choose the most potent location of a theatre where the real action happens – backstage.

Curtains is knowing of its provenance, a loving parody of all things theatrical and retrospective. A smash hit on Broadway, this is the first professional European performance of Curtains, and marks the professional debut of several of the troupe who get to play alongside seasoned musical performers. It is only at the Langdon for six weeks, and the venue is small, so remind yourself or discover why you love theatre by getting to see this treat of a show.

Curtains plays at the Landor Theatre, SW9, until 1st September 2012, so for further information and to book tickets, click here.