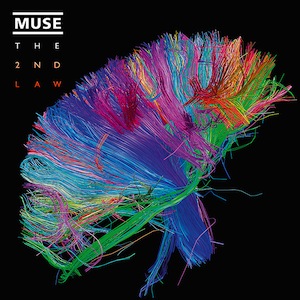 Muse’s graduation to fully fledged stadium behemoths, with newfound Olympic credentials to boot, has considerably raised the stakes for their new album. Sure, creating music for the masses may seem like an easy enough brief for a band whose finest moments (Citizen Erased, Stockholm Syndrome, Knights Of Cydonia) seem to transcend earthly notions of enormousness, but the Devon trio’s previous album, The Resistance, was a ham-fisted mess of empty sloganeering and wildly over-optimistic prog-rock suites. How did the band choose to respond this time? With a “christian gangsta-rap jazz odyssey, some ambient rebellious dubstep and face-melting metal flamenco cowboy psychedelia”, apparently. The 2nd Law is released on 1st October.

First track and would-be epic Supremacy doesn’t bode well at all, aiming for Kashmir and ending up sounding like The Darkness. But then, out of nowhere, come two of the band’s most straightforward, enjoyable pop songs to date – Madness updates Queen’s I Want To Break Free for the iPad generation, setting Bellamy’s disarming croon over layers of burbling synths, and the funky Panic Station harks back to the Cure at their most deranged. Finally, here are some songs that can be deployed in the band’s formidable live show, without seeming like mere placeholders alongside old favourites like Time is Running Out.

The rest of the album is full of similar surprises. Survival sounds revitalised in the record’s context, no longer the hackneyed Olympics-montage fodder of this summer. Bassist Chris Wolstenholme handles lead vocals for the first time on two tracks, and does a sterling job on the heartfelt Save Me, even if his rockier turn on Liquid State is far less convincing. However, when such eccentric experiments go wrong, notably on the botched dubstep of Follow Me, The 2nd Law can make for truly excruciating listening. The irony of Matt Bellamy, of all people, giving a lecture on the perils of excess during Unsustainable is certainly not lost either.

Ultimately, it feels redundant to criticise the band for their extravagance – like deriding the White Stripes for being too basic, or Serge Gainsbourg for being too French. Muse have always represented the acceptable side of ludicrous musical over-reaching, and at this stage in their career they might as well be as preposterous as possible: embrace “Monty Python-rock”, to quote Bellamy in a recent interview. There is absolutely zero cohesion on this album, and the “spot-the-obvious-musical-influence” game grows old after a while, but the band deserve credit for facing up to their recent superstardom by doing whatever they damn well please, even if the results are mixed.

The 2nd Law is released on 1st October, but you can pre-order the album here.