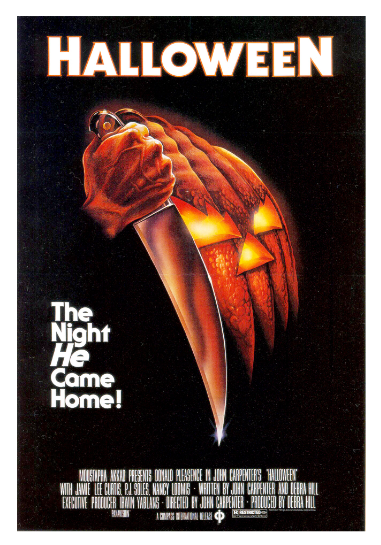 If you’re looking to invite the horror into your home rather than inflict your trick or treat costume on elderly neighbours, take a break from hiding behind the sofa and consider our definitive list of scary films for Halloween. Whether your preference in horror is for gore or psychological thrillers, these films are guaranteed to bring a fright fest into your living room. Are you sitting uncomfortably? Let’s begin with the classic and appropriately titled Halloween. Legend has it that John Carpenter’s low budget slasher flick left Hollywood producers unimpressed, only to leave them jumping out of their seats later when he added the now iconic musical accompaniment, adding to the growing suspense and horrifying gore unleashed by Mike Myers on an unsuspecting young Janet Lee Curtis and friends.

Watch out for: the origins of slasher movie cliché, bodies falling out of loft hatches and the not so good sequels that followed.

Julie Christie and Donald Sutherland travel to Venice to grieve the loss of their drowned daughter, only to be haunted by a creepy girl in a similar coat, running away in a city with a lot of water.

Watch out for: scary clairvoyants and anyone wearing red.

Better known for the original Japanese Ring films, Nakata brings horror to the domestic. My personal favourite on this list, Dark Water follows the events of a single mother and her young daughter who discover disturbing secrets leaking from the apartment above theirs.

Watch out for: scary children in the lift and the less impressive American 2005 remake.

Good intentions unintentionally disturb the spirits of wronged children in a rundown orphanage. It’s as creepy as it sounds, led by an amazing performance from Belen Rueda.

A young couple relocating to France quickly regret their decision to live in an isolated house by the woods. Described as “77 minutes of gloriously maintained tension”, masked tormentors instigate a game of cat and mouse culminating in a shocking climax of gore, and a chilling twist tacked on for good measure.

Watch out for: the sound of unexplained music. Getting lost in the Australian outback is the beginning of the end for three backpackers. Gritty realism and prolonged camera close-ups make parts of this film incredibly difficult to watch, with some early versions of the feature being heavily edited down for its release. Not for the faint hearted, seriously.

Watch out for: garages filled with abandoned cars.

Themes of romance and revenge are expertly handled by Chan-wook in this psychological thriller, ending with an unpredictable twist that leaves the audience reeling. The director’s commitment to a frankly unbelievable narrative set-up pays off for the audience, as equally baffling character motives are revealed.

Watch out for: photo albums.

A family are held hostage in their holiday home by psychotic next door neighbours with a penchant for betting with fatal results. Combining psychological “mind games” with the gore-porn genre made popular by film franchises such as Saw and Hostel, this feature is not fun for all the family.

Watch out for: the bit in the living room (the whole thing).

Watch out for: everything.

And the wild card… Self-indulgent, morbidly joyless and as “strange and twisted as you would expect from David Lynch” was the critical response to this film’s release 20 years ago (critical being the operative word).

Lynch has a well-earned reputation for bizarre and non-sequitur film-making, attracting cult fandom and terrible reviews in equal measure. Not for the faint hearted or easily bored, Fire Walk with Me has been praised for its weird humour and originality in plot and design (by us) and been criticised for its ridiculously bad acting and tedious monologues (by everyone we’ve seen it with). Watch with company at your own risk. But fans of Lynch’s similarly creepy output Blue Velvet, Eraserhead and Lost Highway, will delight in his own peculiar brand of horror.

Watch out for: a weird cameo by David Bowie in a cream suit.