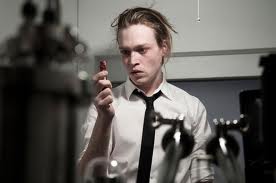 Brandon Cronenberg’s debut film is a disturbingly imaginable exploration of a not-too-distant dystopian future, where the idea of getting your “pound of flesh” takes on rather a literal meaning. We follow the journey of Syd March (Caleb Landry-Jones), an employee of the Lucas Clinic, which offers obsessive fans the chance to purchase a virus from their celebrity idols, sold with the promise of providing  the ultimate bond and delivered with a grotesque “Enjoy!” While embezzling a particularly valuable product, Syd unwittingly becomes a commodity himself and is embroiled in a dark experiment with a designer virus, leading to a desperate hunt for a cure.

Clearly stylistically inspired by the director’s father, David Cronenberg, the film unravels into a gruesome body-horror, and what is in essence a modern take on vampire mythology. Blood is everywhere you look, contrasting starkly with swathes of sterile white walls and clothing. There are repeated, sustained close-ups of hypodermics puncturing skin. A tense, steady pace maintains an undercurrent of menace preceding Syd’s horrifying descent into sickness.

Landry-Jones is strong in the central role, suitably intense and displaying otherworldliness, pallor, and a bloodlust to rival any cinematic vampire. While we never quite understand his character’s motives and actually never really emotionally connect with him or indeed anyone, the performance is raw and animalistic. Malcolm McDowell, on the other hand, is an odd bit of casting in a odd role, and his appearances jar somewhat.

The mirroring of the vampire theme with extreme celebrity culture is intriguing and works well, but the nagging message that our culture could be heading down a very dark path is not a new one, and the point becomes extremely laboured in the drifting storyline. Overall it’s too drawn out and overcooked, favouring style over substance. However, it does succeed in provoking an unpleasant physical reaction that will stay with you afterwards when you try and sleep.

Antiviral is out in selected cinemas now.

Watch the trailer for Antiviral here: