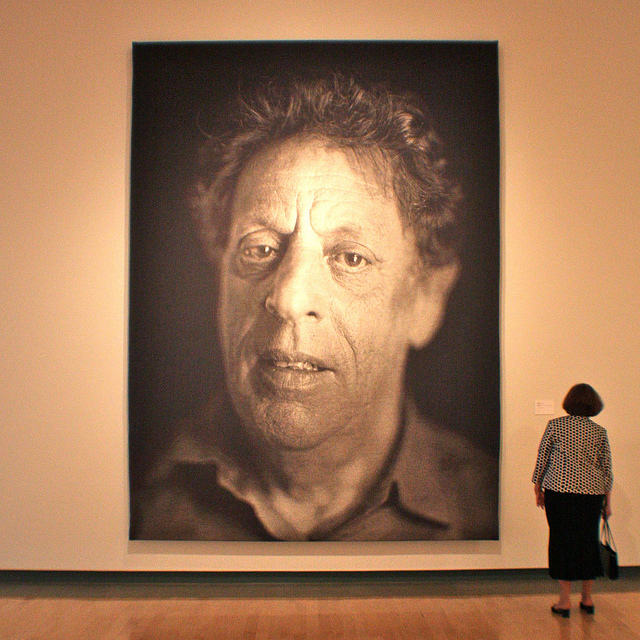 With New York’s art elite as their subjects, including John Chamberlain, Lou Reed and Philip Glass, the portraits of Chuck Close have never failed to garner attention. With largely unchanged subject matter since the late-1960s, Close’s often dauntingly large and always starkly penetrating portraits still manage to attract the fascination and praise of his audience and peers. There’s only ever been one variable in how he creates his images, and that’s his method – something that is laid bare and closely examined in this latest exhibition at Bermondsey’s White Cube. Chuck Close (born 1940) eventually moved to New York City in 1967, by which time he’d begun painting large-scale portraits based on photographs, each one an extreme close-up of an acquaintance. Their genesis was very methodical, and these large-scale paintings were admired for their meticulous nature and photorealism. Struck down by a spinal artery collapse in 1988, Close experienced a massive reduction in his motor function, forcing him to paint from his wheelchair. As a result of the artist’s new physical limitations, his later paintings were conversely characterised by their low resolution.

Confronted by the 150 prints on display at White Cube, which range from Close’s first print in 1972 (a mezzotint damaged during printing) to a tapestry self-portrait completed this year, Close’s canon seems anything but repetitive. So rich, varied and fascinating are the disparate processes behind every print, one quickly becomes charmed and enthralled by Close’s immovable creativity. There’s wall after wall of colourful silkscreens, tapestries, woodcuts, pulp prints and collages, each one a collaboration with both the print-maker and the chosen medium. Some of the works are broken down, displayed at various points in the creation process, while other prints made from the same initial images are similarly displayed side by side, sometimes created decades apart.

Chuck Close is a shrill artistic voice and it has always been easy to be impressed by his large-scale works. As something of a happy and willing determinist, he has always taken into account his limitations and allowed them to direct how he creates his portraits. However, it is only by revealing his Process & Collaborations that Close’s portraits can be fully appreciated – something that this exhibition, now some 40 years in the making, does extremely well.

Chuck Close Prints: Process and Collaborations is at the White Cube Bermondsey from 6th March until 21st April 2013. For further information, click here.