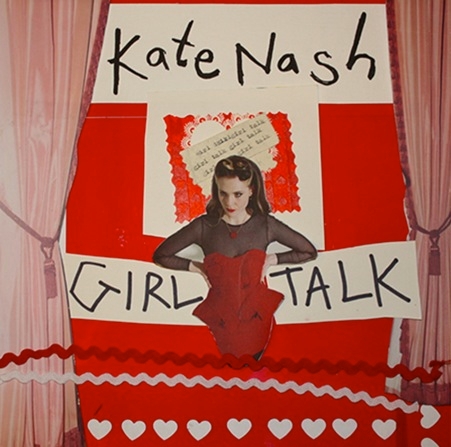 Opening track Part Heart instantly shows a different side to the 25 year-old Nash: an echoed and almost unfinished sounding offering with a bizarre, stark anger. “It doesn’t matter how many times I change my clothes, I still feel the same”- reassuring listeners she’s still the same person, just a bit louder.

Death Proof mimics Shirley Manson vocals, though it mirrors Garbage only in namesake, proclaiming, “I don’t have time to die” as an angst-ridden outro. The general lack of production on the album contrasts with the pop sounds Nash mastered earlier in her career, creating puzzling queries about who she genuinely is as an artist and songwriter.

More diversity is shown in OHMYGOD. Irritating enough to be a single, this track travels from down to mid tempo, and shows glimpses of engaging lyrical quirkiness, mentioning postcards, vitamin C, and unremarkable kisses with dolphins.

All Talk is really just that: thrash–pop filler, childishly stating, “I’m a feminist and if that offends you, F*CK YOU”. Next single 3am seems an odd choice, as this unoriginal paean of late night desire does little to evoke imagery, and makes scant musical impact, relying on text book lyricism: “Cut the pill and take my chances with a half”.

Rap for Rejection is noteworthy, boldly opening with “I’m a stupid whore and a frigid bitch”. Known for her feminism, Nash takes no prisoners, bemoaning the unfair sexism in modern culture, music and fashion beneath gramophone vocals and catchy drumming. The first use of keyboards is marked in Labyrinth, a song undoubtedly penned for advertisement bliss.

Closing track Lullaby for an Insomniac signifies the evident identity issues seeping through Nash’s writing. A capella she sings, “Another day goes by and I don’t wash my hair”, however this lyrical blandness comes across as lazy instead of coyly sarcastic – the musicality isn’t strong enough to allow such meek writing. With an instrumental crescendo, the album ends.

It appears, in trying to be taken seriously, Nash has lost her endearing quirkiness, leaving middle of the road brat-rock in the cracks of her foundations.

Watch the video for 3am here: