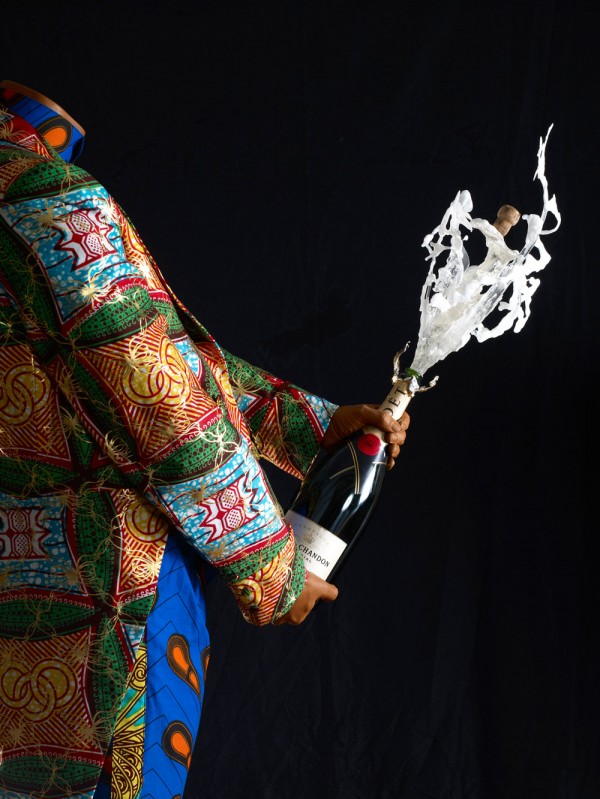 In this latest exhibition from Yinka Shonibare, coinciding with a major career retrospective at Yorkshire Sculpture Park, the artist stays true to form, exploring the themes of excess, corruption and greed. The centrepiece of the exhibition is a tableau involving a long dining table laden with a half-eaten feast, abandoned by the guests who have shifted their attention to each other. The guests are headless mannequins dressed in elaborate period costumes made from Yinka Shonibare’s trademark multicoloured wax batik fabric, each frozen in a pose of sexual abandon. In the room behind this scene, a group of five smaller mannequins entitled Champagne Kids complements the theme. Each child holds a bottle of champagne, frozen in the act of falling back on their chairs or precariously hanging from the walls. Their heads are globes, each printed with the names of financial institutions connected to the economic crash: Lehman Brothers, the Greek Stock Exchange, the Ireland Stock Exchange. These, it would seem, are the children of excess, decadent and unsupervised, the personifications of the institutions printed on their globular heads. In the second part of the exhibition, situated across the road, another headless mannequin stands holding a bottle of champagne suggestively low over his groin, while the exploding contents are frozen in mid air. This man seems strangely pregnant, rather than fat, with gold ornaments hanging from his bright waistcoat. Opposite him is a golden panel covered in bright batik fabric disks, each with a number of black toys radiating out on sticks. The toys, ranging from pistols and handbags to crucifixes and the Chanel emblem, are decorated with coloured diamanté, each one a glittering indictment against the fetishisation of war, religion and luxury goods.

The exhibition is concluded with two portraits of Yinka Shonibare himself, each one a photograph printed onto a canvas and overlaid with more batik patterns. Shonibare is referencing Andy Warhol’s Camouflage, where the convention of the individual in the self portrait is subverted by the impersonal nature of the camouflage pattern. Here it would seem that Shonibare is disappearing behind his own construction of himself.

This playful and wittily realised exhibition explores Shonibare’s pet themes of globalisation, corruption and consumerism while delivering humour and satire. On leaving the exhibition in London’s Mayfair and walking past Chanel and Tiffany’s, one is left wondering whether the irony of its location is an intentional ploy or a happy accident.