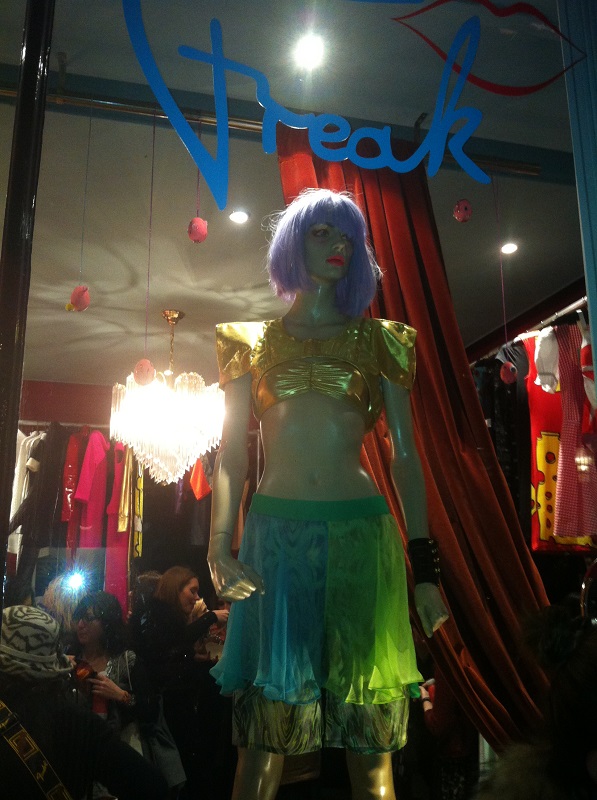 Chic Freak is without a doubt Portobello Road’s answer to cutting edge, refreshingly innovative and vibrant fashion. The “Aladdin’s Cave” of quirky, vintage and individual wares held an event last night hosted by one of Chic Freak’s designers herself Ada Zanditon, which The Upcoming was lucky enough to attend. The boutique truly injects something different to Portobello Road. With the majority of the stores on the fashion-famous street offering classic and conservative pieces, Chic Freak rebels and immediately stands out initially  through the bright, care-free and wonderfully weird window display. Reflecting the famous American sitcom The Golden Girls, the Ada Zanditon designs seen in the window draw onlookers in and were hugely praised by those who attended, with Zanditon describing her designs as “confident elegant pieces that allow the wearer to express their beauty, intelligence and individuality”. As well as Ada Zanditon’s memorable pieces, the boutique also stocks other designers such as Rodnik Band, Hudson Jeans, Pam Hogg, Sick Girl, Wild Fox and many more, which gives a varied and versatile choice to meet those who want to embrace individual fashion. Many of the pieces available are influenced by British culture, in a contemporary way with one design by Rodnik Band particularly standing out – a bright yellow coat channeling The Beatles’ “yellow submarine”. As if the cosy, intimate boutique isn’t intriguing enough to go and check out, then the opportunity to have a make-over, dress up in the clothes and have a photo shoot done in the fashion treasure cove itself might just sway you. Whether you’re one to experiment in the adventurous pieces that Chic Freak has to offer, or if you just want to take a look at the exclusive, unique designs, this boutique is a must-go if you’re ever shopping on Portobello Road.

Mark Fast discusses the wonderful world of wool
Beyoncé for H&M: The face of their summer collection