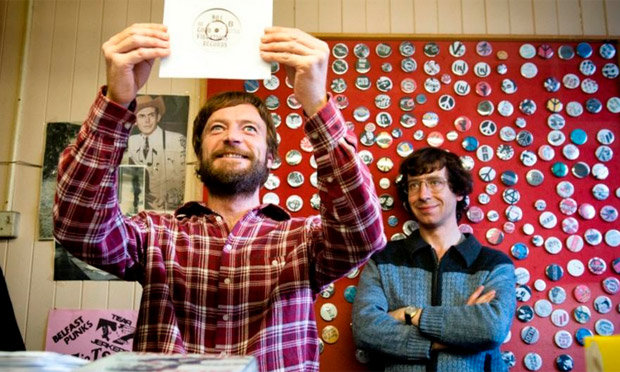 Directed by Glenn Leyburn (Cherrybomb), Good Vibrations is a biopic about “the godfather of the Belfast punk scene”, Terri Hooley. Hopeful and eccentric, but by no means clownish, Terri opens a record shop on Great Victoria Street in Northern Ireland – an area notorious for IRA bombings and occasional shootings. Hoping to bring music to Northern Ireland amid the Troubles, Terri ends up becoming a prominent figure by signing bands to his own label including The Undertones and The Outcasts.

Richard Dormer (who will soon be appearing in the third season of Game of Thrones) does well in his portrayal of the maverick figure, and revels in his role with biting sarcasm and delightful charisma. Taking it upon himself to drive bands in cramped vans, run a shop, and fly to London to beg smarmy record label executives to sign his charges, Hooley’s struggle to keep everything in balance certainly garners sympathy. Dormer’s performance is captivating; it’s hard to think of another actor who could have done a better job.

Ultimately Good Vibrations’ fatal flaw is that it rehashes just about every music biopic cliché in the book (including the “It’s not music it’s a way of life!” tirade that’s been done so many times before).  Jodie Whittaker’s portrayal of his wife feels underdeveloped as her character isn’t really given enough screen time, and you can guess what type of ending the film will have a good twenty minutes before it happens.

Yes, it is a testament to the uniting powers of music; yes, it looks deeply and accurately at a horrendous time in recent history; and yes it is also humorous with an eclectic and vibrant soundtrack. Unfortunately, however, the bankruptcy, beatings, births and inspirational speeches render Good Vibrations another generic biopic about a musical figurehead.

Good Vibrations is released in selected cinemas on 29th March 2013.