People at the National Theatre 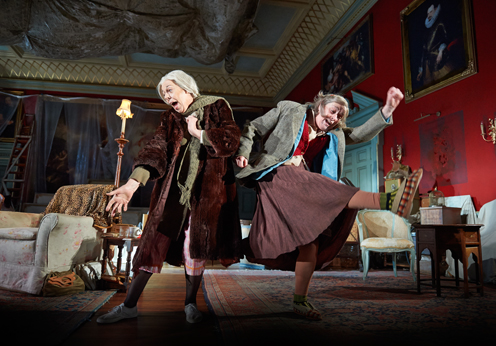 On display in the National Portrait Gallery there is a portrait of Alan Bennett by Tom Wood. The playwright sits aloof and pensive, seemingly unaware of the wall plug and brown paper bag on the table in front of him, two objects that instantly provoke questions in the audience: imagery for imagery’s sake. Bennett’s latest play, People, now on at the National Theatre, perhaps more than any of his previous works reflects this self-awareness, as the characters themselves even discuss their situation’s allegorical implications, actively debating the heavy handed, yet no less effective metaphor of their story.

Frances de la Tour heads up the cast as Lady Stacpoole, the owner of a slowly decaying old manor house in Yorkshire, herself and her two sisters ageing in kind in the shadows and corners of the imposing building, and spending most of the play debating whether or not the house should be “returned to the people” via the National Trust, or sold to a private concern and thus preserved from the prying eyes of the public. An array of visitors comes and goes, ranging from Miles Jupp’s dry-witted appraiser to the outright farce of a low-budget pornographic film production.

It’s intriguing and utterly Bennett-like how the text of the play battles not to drown in heady symbolism, while the characters themselves populate the stage with little more than farcical and at times almost Benny Hill-like passages of light comedy. Lady Stacpoole is a recluse, (literally) still stuck in the throes of Falkands-era Thatcherite Britain, coming to terms with the commercialisation and commodification of privacy (a fate which she wishes to avoid for the play’s other lead part – the house itself).

As a text, People is certainly a triumph. What it truly represents or implies is endlessly debatable, but it unquestionably leads the audience to think on the state of England and society – whether or not our decaying nation should revel in the façade of its former glory or be left to graciously rot in private. The production and cast look and feel intrinsically old, and their somewhat naive portrayal of modern society (and particularly the porn industry) is ultimately a dated one. However, as is the way with Alan Bennett, the ends outweigh the means, and the powerful text overpowers any onstage antics. People is a funny, compelling and pensive missive on decay, which, as Lady Stacpoole proclaims, is in its own way “a form of progress”.

People is on at the National Theatre’s Lyttleton Theatre until 15th May 2013. For further information or to book click here.