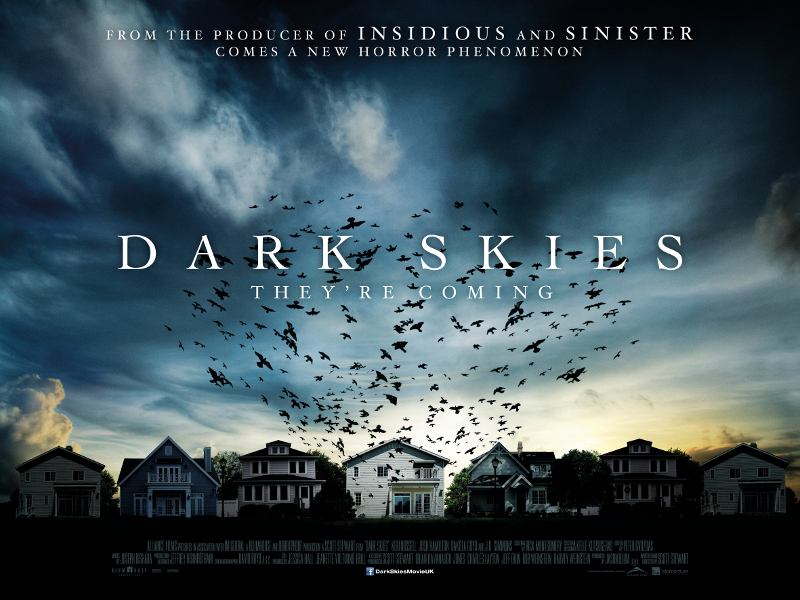 From the producers of Sinister and the Paranormal Activity franchise comes Dark Skies, a thrilling assemblage of horror components which will have a nerve-shredding impact on even the most resolute of viewers. Director Scott Stewart has hit the nail with Dark Skies, choosing to compile elements from other horror movies rather than sticking to one sub-genre. Fans will recognize nods towards films such as The Happening, Signs, and of course Paranormal Activity. Mixing together ideas has produced a film in its own league, unique and with the ability to scare.

Lacy (Keri Russell, Mission Impossible III) and her husband Daniel (Josh Hamilton, Alive) live with their two young boys Jesse (Dakota Goyo, Real Steel) and Sam (Kadan Rockett) in an all-American neighbourhood. When strange goings on begin to effect their lives both Lacy and Daniel try to resist the obvious before seeking out veteran extra-terrestrial specialist Edwin Pollard (J. K. Simmons, Spiderman) to help them out of their E.T predicament.

The concept of Dark Skies, although a little far-fetched and unexplained, is definitely unique – for that reason the film rates highly. The storyline is gloomy, but this highlights the touching relationship between the two young siblings, bringing hope to the seemingly doomed family.

Dark Skies is guaranteed to get a mixed reception: diehard fans of the Paranormal Activity films will mostly dislike the alien concept. However, with an open, un-analytical mind, Dark Skies may be able to provide you with enough scares to make it worthwhile.

Dark Skies is released in UK cinemas on 5th April 2013.