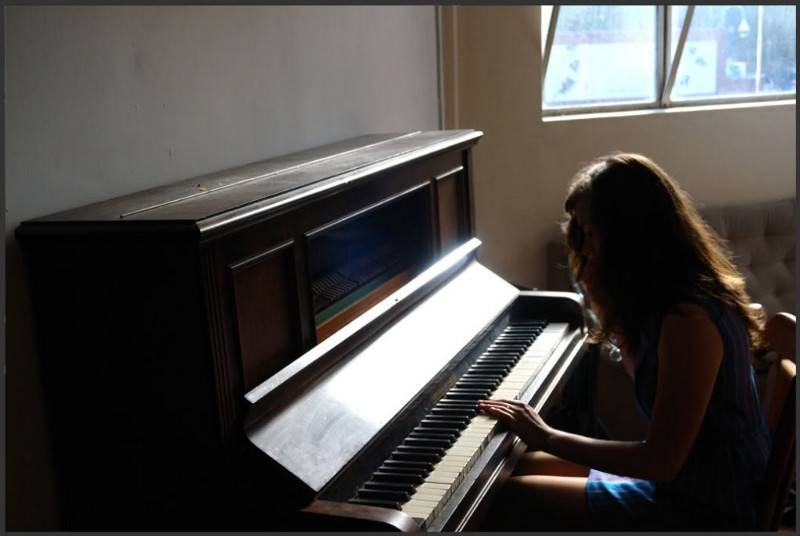 While everyone was still browsing the merchandise in Rough Trade East, Hollie Fullbrook from Tiny Ruins quietly took to the stage and without any introduction started playing. The lights went down, noise from the crowd lowered and people gathered to listen to the young girl perform an acoustic set taken from the band’s first album Some Were Meant For Sea and their new EP Haunts. The audience’s attention was immediately captivated by Fullbrook’s ethereal voice and the way she delicately pinched the cords on her guitar. The mellow melodies gently caressed everyone’s ears, as if transporting them to a peaceful crystalline, fresh water brook. The suggestions of water don’t stop there. Hollie’s voice is as clear and pure as running water, and the group’s break-through record references the sea, suggesting that water is a determining factor in their lives. The band hails from New Zealand, with its beautiful scenery, so perhaps this makes sense.

To minimise travelling costs only Fullbrook was able to attend the gig, but her intimate performance wasn’t missing anything. Resonating through the speakers, the no-frills music put everyone at peace, hypnotizing and soothing in the healthiest possible way.

Bird In The Thyme or Priest With Balloons was like balm to the heart and mind; other more “bluesy” tunes (as Hollie defined them) like Rolling Mill Blues, or She’ll Be Coming Round, were more intense regardless of the simple arrangements they were rendered with.

The peculiar lyrics suggested that the creative process was one of personal experience, and not a money making gimmick, as in so much popular music.

If you want to relax while being entertained, make sure you check out Tiny Ruins.

Watch a live performance for Bird In The Thyme here: