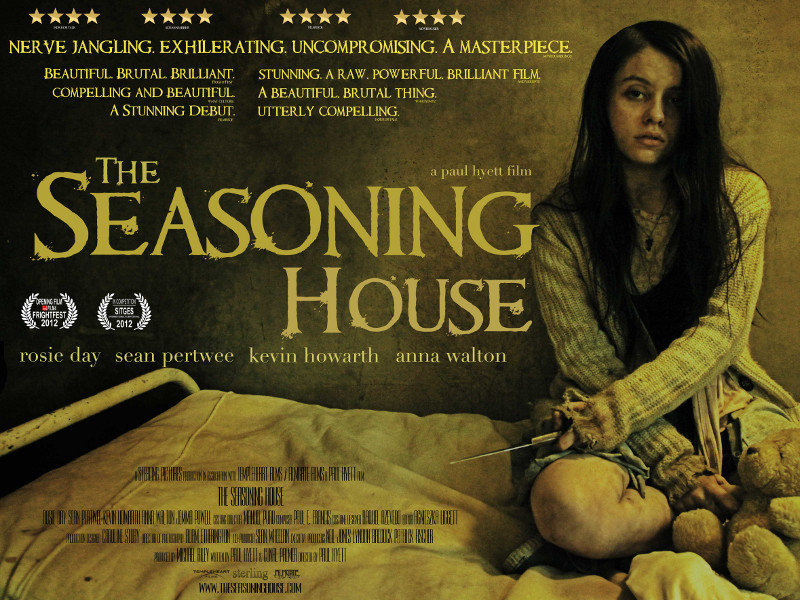 There is something ominous about the title The Seasoning House, setting the mood before the film has even begun. Making his directorial début is Paul Hyett, who made his name as a prolific make-up effects artist over a stretch of nearly two decades, working on titles such as The Descent and The Woman in Black. Combining his talent to produce awesome effects and a desire to write and direct comes The Seasoning House: a hard-hitting horror set to turn tummies throughout the UK.

Set in the Balkans, 1996, the film opens in almost complete silence as a group of vulnerable young girls enter a God-forsaken hell-hole of a brothel, ready to please the resident soldiers – both unpleasant and disturbing.

Angel (Rosie Day), a deaf-mute, is saved from the violations the other girls suffer on account of her “hear no evil, speak no evil” persona. By the hand of Viktor (Kevin Howarth), the house pimp, Angel preps the other girls ready for their abusers, doping them to help them bear the pain.

The claustrophobic effect of the house is exaggerated further when Angel moves undetected, crawling in and out of air-vents, able to watch over her fellow captives and provide them with comfort.

The film spirals after Angel’s closest confident is killed; with nothing to live for, she seeks revenge on the beasts visiting the house, who are coincidentally connected to her parents’ deaths.

Psychological horror The Seasoning House is a great success for first-time director Hyett; both suspenseful and thrilling, the film features a couple of great twists, which brings the film away from the gore-for-the-sake-of-gore film Hostel.

Rosie Day does a fantastic job as Angel, personifying innocence and vulnerability whilst demonstrating ethereal qualities – a perfect catalyst for the blood-bath showdown.

Although The Seasoning House won’t be to everybody’s tastes, Hyett has produced a great début and proven himself as a director, while allowing Day to flourish as a future scream-queen.

The Seasoning House is released in UK cinemas on 28th June 2013.

Watch the trailer for The Seasoning House here: