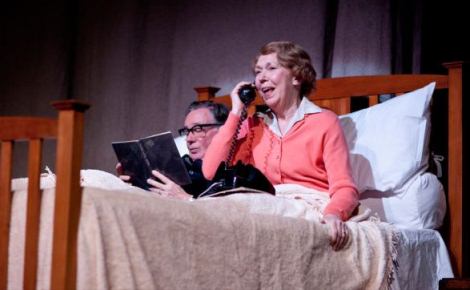 It is a moment of rare beauty to see a whole theatre moved to tears of joy and sadness by the same story.

The words of Alan Bennett made this possible, with actor Alex Jennings bringing them to life. On Tuesday evening Jennings made his debut in Untold Stories, featuring both Hymn and Cocktail Sticks in a double bill of autobiographical work by Bennett.

Hymn, a 30-minute show directed by Nadia Fall has music at its centre and begins with Jennings (impersonating  Bennett, on a stage set as an intimate living room) explaining how, as a child, he had asked his father for lessons on the violin. With the anecdote as starting point, the author/character remembers how musicians in church were completely transfigured while performing, only to return to their common shabbiness as soon as they put their instruments down.

Music features not only as protagonist in that it is the subject of the play, but is also represented literally onstage in the form of a string quartet, translating words and atmosphere as music, and functioning at times to caption the mood. The music was composed by George Fenton, who in 2001 received a request from the Medici Quartet to commemorate their 30th anniversary; the composer asked Bennett to collaborate. The original score is performed onstage by members of the Southbank Sinfonia.

Intelligently directed by Nicholas Hytner, the second play Cocktail Sticks is an autobiographical account of Bennett’s experience through childhood, adolescence and adulthood in his parental home in Armley, Leeds.

His parents are portrayed by the outstanding Gabrielle Lloyd and Jeff Rawle, with Sue Wallace and Derek Hutchinson playing occasional characters appearing along the way.

The tale is a moving commentary on contrasting generations and the discovery of what a façade of normality can hide. Jennings put on his best Yorkshire accent and teenage attitude, creating a funny and believable version of a 17-year-old Bennett. He was an impeccable narrator, moving in and out of the scene as active participator and reminiscing bystander by turns. The author unravels memories to explore his detachment from a confused childhood, which makes for powerful theatrical material. Very soon, issues that are unseen or unacknowledged are paraded in front of the audience: a desire for normality, a clear reference to the author’s homosexuality (the only one in Bennett’s oeuvre), his mother’s depression and a complicated relationship with his father.

At the end of the show, amid energetic applause, Jennings asked in a voice cracking with emotion for the audience to remember the late Richard Griffiths, great performer of Bennett’s works.

Untold Stories – Hymn & Cocktail Sticks is on at the Duchess Theatre until 15th June 2013, for further information or to book visit here.