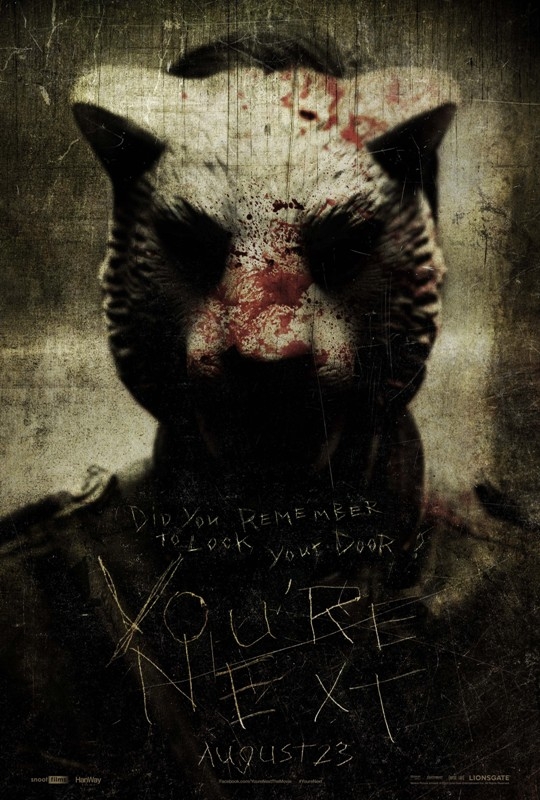 Nearing on intelligent, You’re Next is an absolutely stonking addition to the thriller/horror genre that has surpassed its predecessors with triumphant gore and vigour. After a seemingly irrelevant opening (a scene setter with all the usual ingredients: sex, nudity, and then blood) You’re Next really begins.

Unassuming and uncomplicated, the story unfolds around the dysfunctional Davison family who by all accounts personify the gloriously diverse personalities normally showing up in this type of film. Getting together for the first time in years for their parents’ – Paul (Rob Moran) and Aubrey (Barbara Crampton) – 35th wedding anniversary, the grating behaviours of siblings Crispian (A J Bowen), Drake (Joe Swanberg), Felix (Nicholas Tucci), and Aimee (Amy Seimetz) play a big part in the film’s plot.

Also in attendance at the family’s remote country manor are various partners – four even more varied personalities to throw into the mix! Two opposite ends of the personality spectrum are Erin (Sharni Vinson, Home and Away) Crispian’s younger lover, and Zee (Wendy Glenn) the morose girlfriend of Felix.

During a “civilised” (using the term loosely) family meal with only the ordinary family altercations disrupting the otherwise perfect setup, the horror begins when the house comes under attack. The chaos that ensues, teamed with some amazingly dramatic music and “goresome” special effects, accelerates the level of entertainment skyward.  There is also a dark comic element shifting awkwardly from one character to the next, which constructs humour at the most inappropriate moments – something which brings a wholly refreshing lease of life to the film.

Coming full pelt from writer/directorial duo Simon Barrett and Adam Wingard, once the action starts in You’re Next it holds strong through to the end credits. Barrett’s storyline and Wingard’s direction have resulted in a film so confident in itself, the audience can really let go, allowing the film to take the mickey out of itself in some not-so-subtle ways. Nonetheless, the result isn’t gimmicky or reminiscent of Scary Movie – it is instead something far more thrilling.

Having previously collaborated on A Horrible Way to Die it is crystal-clear Barrett and Wingard are something of a dream team when it comes to this genre of cinema.  Vinson comes into her own as the Aussie heroine, a scream queen-come-action hero; the rest of the actors are a little questionable in their quality, but do make good murder fodder for the mask-clad attackers.

Never a dull moment, You’re Next is a slashtastic thriller that is guaranteed to exhilarate and entertain: definitely one to see this summer!

You’re Next is released nationwide on 28th August 2013.

Watch the trailer for You’re Next here: