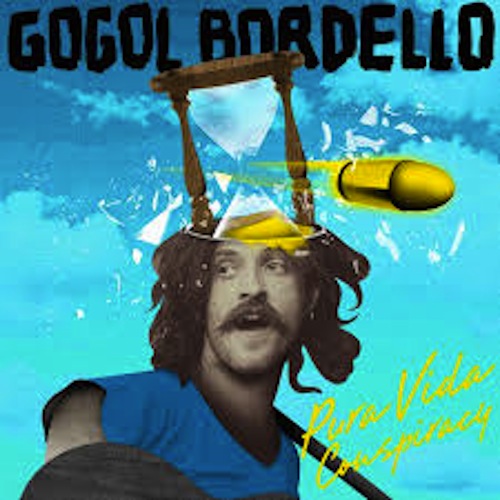 With their sixth studio album, Gogol Bordello offer up another helping of genre-spanning, raucous and revolutionary anthems for our enjoyment. Pura Vida Conspiracy is a wholly unique and jubilant record that would fit comfortably on anyone’s summer playlist. Despite their relative maturity as artists, the band’s sound is as surprising, fresh and diverse as ever. For over a decade, the globe-trotting gypsy punk band’s extensive touring schedule has proven their traveller credentials, and like its predecessors Pura Vida Conspiracy is perfectly suited to entertain and delight festival crowds the world over. The music’s attempts to reclaim how the term “gypsy” is applied results in the wonderful cross-cultural pollination of influences. Traditional Latin American and Russian sounds coexist joyously as the album creates an audio celebration of multiculturalism.

The activism entrenched in the band’s output is immediately apparent and triumphant album opener We Rise Again is unflinchingly revolutionary. The track proclaims in pointedly deliberate broken English: “Borders are scars on face of this planet”. This is continued across the album, notably in My Gypsy Autopilot and Lost Innocent World which both make for powerful listening. Particular standout songs include Dig Deep Enough and Hieroglyph but the track list is overflowing with certain crowd-pleasers.

The chaos and frenzy of the album is allowed a small break with the more reserved I Just Realized, but the driving anarchic spirit is never diminished. It is however tinged with a small amount of irony after the band’s corporate alliance with Coca-Cola; last year they released the song Let’s Get Crazy as part of an advertising campaign for the mammoth corporation. Despite this, the album and its message are unwaveringly earnest and socially significant.

Pura Vida Conspiracy may not sound like anything else in your music collection, but in this case that’s to the credit of the group. While the peculiarity of this niche genre may be initially puzzling, it’s well worth stepping out of your comfort zone for. Take a leaf out of Gogol Bordello’s book by giving their exhilarating and innovative sound a go, and try to experience some diaspora of your own.