Armstrong’s War at the Finborough 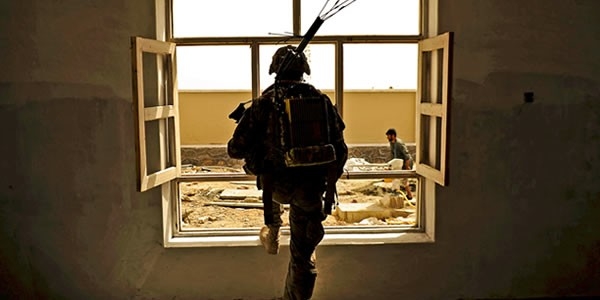 Unlike many foreseeable dramatisations of post-traumatic stress disorder, Jennifer Bakst’s rendition of Armstrong’s War by Colleen Murphy creatively depicts the grief and suffering facing a soldier upon returning from duty, while provocatively casting a child’s blunt and idealistic insights on issues of death, mourning and loss. When injured Canadian solider Michael Armstrong is confined to a hospital room awaiting redeployment after serving in Afghanistan, it seems unlikely that 12-year-old Halley Armstrong’s reading aloud will be able to subdue his anger. But the pair’s individual circumstances allow them to interpret each other’s situation with understanding in a moving and expressive performance about the process of recovery.

Starring Jessica Barden and Mark Quartley, the duo behind Armstrong’s War are real, in sync and absolutely riveting.  While their relationship evolves they create laughter and a genuine sense of friendship in one moment, and move you to tears in the next, exploding with anger and frustration as they come to terms with the hardships they’ve endured.

Barden is both charming and annoying, effectively personifying in exuberance and expression a young girl eager to earn her merit badges. The fading of Quartley’s vexed demeanour reveals an empathetic character you can truly root for.  His performance is convincing and consistent, broken only rarely by the over-inference of Canadian idiosyncrasy in his speech.

The tight venue makes use of all available space, physically placing the audience at the centre of the drama and creating a greater sense of immediacy and realism.

Michael’s flashbacks are subtle and imaginatively recreated with only a slight dimming of lights and the faint sound of steps treading outside, but the effect is captivating.  The audience seem to hold their breath at the height of this retelling, thoughtfully taking in the heartbreaking memories he describes.

With such a rich storyline and talented actors bringing the characters to life, this narrative cannot disappoint.

Armstrong’s War is on at the Finborough Theatre until 27th August 2013, for further information or to book visit here.