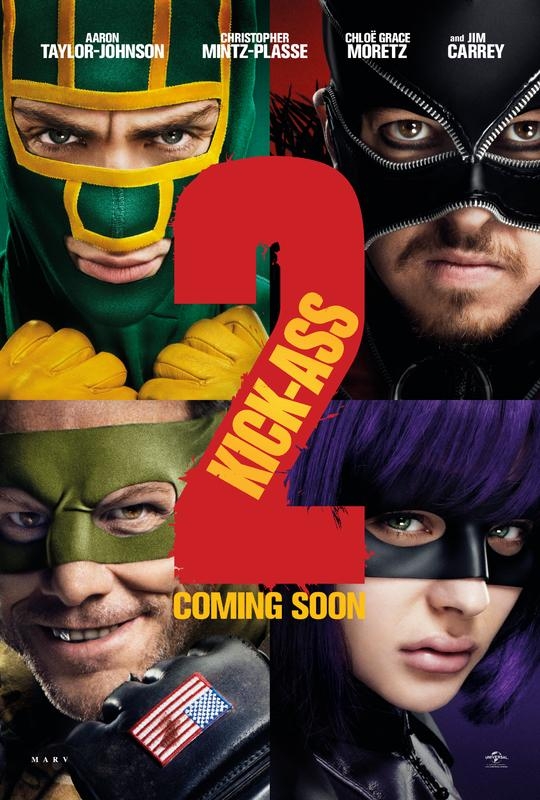 Following the first chapter, released three years ago, this summer will see a new instalment of the Kick-Ass saga. The sequel reprises the story of superheroes Kick-Ass, Hit-Girl and Red Mist (turned The Motherfucker) as they try to get back to a normal existence in the aftermath of Big Daddy’s death. However, Kick-Ass’ popularity has inspired many other ordinary people to dress up in masks and fight crime. While Hit-Girl initially backs off from her own promise to seek revenge, Kick-Ass remains faithful to his vow. Now deserted by Hit-Girl and requiring assistance, he will join a team of other common people aiming to stand up for those in need: Justice Forever. Meanwhile The Motherfucker is also on the lookout for backup on his quest for vengeance and will recruit members to form his own taskforce. Though we see characters struggling to deal with classic teenage growing pains, things get serious as Kick-Ass’ world starts tumbling down and confusion spreads across the city. The Motherfucker heats it up in the approach to his final duel with Kick-Ass, bringing trouble wherever he goes. And many innocents will pay, especially those now in costume and backing Kick-Ass.

Kick-Ass 2 is going to be a blockbuster regardless of the controversy due to its being so explicit. We aren’t spared strong language or extreme violence, but as Chloë Grace Moretz (Hit-Girl) has said “it’s a movie, it’s fake”. In fact, Kick-Ass 2’s lack of pretension is what makes it so enjoyable. It contains lots of bloody scenes but is not the typical action movie where everyone takes themselves too seriously and there’s no space for anything other than fast car chases and explosions. While Kick-Ass 2 has got all of that and more, it’s also got impressive special effects and little coups de théâtre that keep the rhythm balanced (nicely supported by the musical score) – and it’s also quite funny. The characters give their best when they’re anger-driven, and Jim Carrey in a semi-villainous role (as Colonel Stars and Stripes, founder of Justice Forever) is somewhat amusing, particularly as we are used to him in the role of comedian.

The movie overall is good but it doesn’t “wow” as the first episode did. It’s neither bigger nor bolder – ironically the tone is somehow sweetened to convey morals and, although appropriate, the troubled teens’ story is perhaps unnecessary.

Watch the trailer for Kick-Ass 2 here: