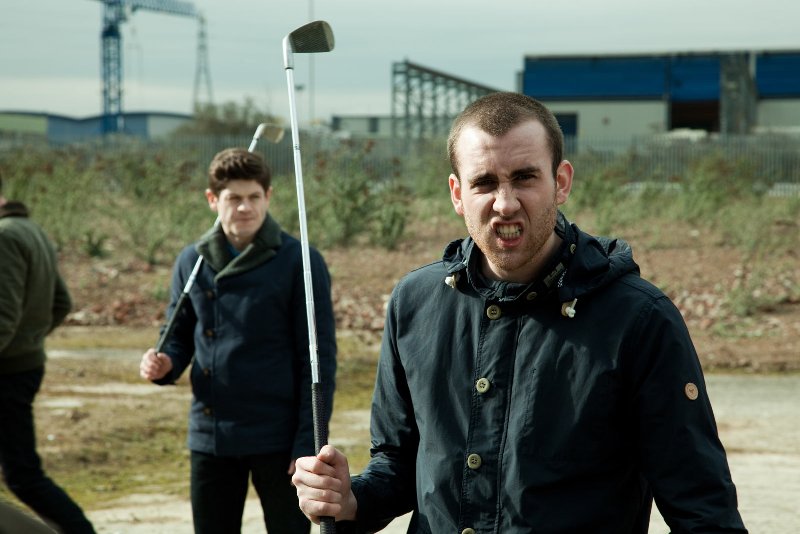 An ideal combination of drama, action and suspense, Rowan Athale’s directorial debut The Rise is marked by flawless acting and strong character development, but the conventional and overdone storyline leaves little unforeseen. After a one-year stint in prison for a crime he didn’t commit, Harvey Miller (Luke Treadaway) enlists the help of his three closest friends (Iwan Rheon, Matthew Lewis and Gerard Kearns) to plot a heist, take what’s owed and wreak revenge on the local drug lord who put him away. The eloquent and punchy script flows naturally and creates a witty and direct narrative perspective that you side with almost immediately.  Treadaway grabs your attention from the moment he’s onscreen; his brutally beaten face but composed expression leave you questioning what you see and eager to take in his explanation.  Neil Maskell as Steven Roper is successful in creating an antagonist worth fearing:  his aggressive manner and the cruel intimidation tactics he employs to keep control reveal psychotic behaviour that you hope to see punished. Kearns’ supporting performance outdoes the celebrity of co-stars Lewis and Rheon with an emotional and convincing portrayal of a young man struggling to progress beyond his circumstances and leave behind the only life he knows.

While superb acting is a key driver in the intrigue of this film, stylistically Rowan reveals careful attention to detail in the quality of the cinematography, sound and editing.  The seamless continuity throughout makes for smooth transitions from shot to shot and allows you to get lost in the story without focusing on the mechanics.

Although there are many strong elements that resonate with viewers, the general predictability of this type of plot leaves something to be desired.  We’ve seen it before in the likes of Lock, Stock and Two Smoking Barrels, Snatch and Ocean’s Eleven but you’re left wholly entertained and morally satisfied nonetheless.

The Rise is released nationwide on 20th September 2013. Watch the trailer for The Rise here: