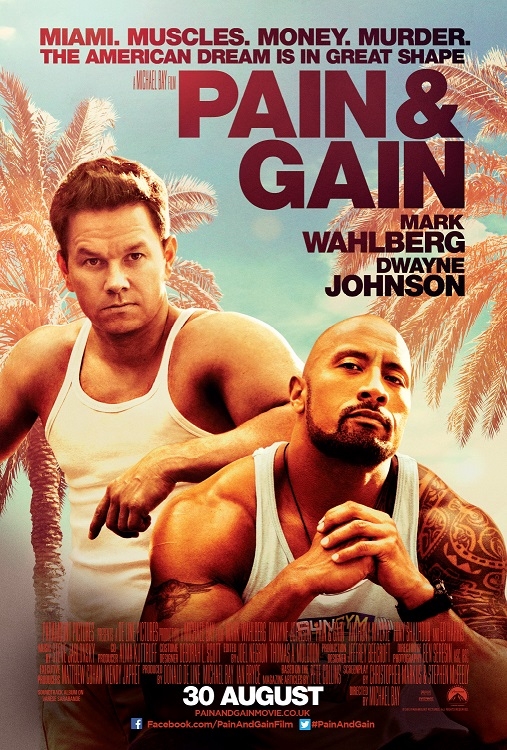 The concept may be ludicrous, but where director Michael Bay’s latest film really surprises is with the notion that the events are true. Yes, three pumped-up body-builders really did go to morbid extremes to accomplish the American Dream, and yes, the outcome (given their lack of genius) is just as predictable as the results of steroids. Given that Bay has a serious set of films under his belt (Bad Boys, Transformers, and Pearl Harbour to name a few) Pain & Gain is not going to be exempt from harsh critique.  The expectations of this dark comedy are as huge as the bulging muscles within, and consequently this film should be set for a few rotten tomatoes from film snobs.

Pain & Gain is hugely enjoyable. Mark Wahlberg is fantastic as Daniel Lugo, an average personal trainer living in Florida with very extreme dreams.  After meeting self-help guru Johnny Wu (the infamous Ken Jeong, The Hangover) and discovering that the world is split between “do-ers” and “don’t-ers”, Lugo becomes obsessed with improving his life financially.

Teaming up with sidekicks Paul (Dwayne “The Rock” Johnson, Fast & Furious) and Adrian (Anthony Mackie, The Hurt Locker), the three powerhouses embark on a not-quite Ocean’s Eleven  attempt to secure themselves financially. The trio’s endeavours are haphazard and despite their best-laid plans to remain (sort of) guiltless, accidents and the resulting aftermath suggest otherwise, and the triangular triplets find themselves running for their lives.

The slow mo, close-up camera shots of the characters working out is enough to break anyone into a sweat, and the content of Pain & Gain does seem to glorify working out… and kidnapping… and violence… and cocaine… The 15-rating does seem a little lenient!

Dark comedy isn’t something American directors seem to excel at. Bay however has successfully created some very sinister laughs from Pain & Gain – look out for scenes that are reminiscent of Guy Ritchie’s 2000 film Snatch.

Overall this film checks the boxes of comedy, action, violence, a bit of a thrill, a splashing of gore, and not forgetting this story is a true one! If the only criticism here is that the title should’ve been Pain FOR Gain – a slightly more self explanatory heading – then Bay hasn’t done too badly, and as far as entertainment goes, the 129-minute runtime flies past.

Definitely worth a watch, even if it is just to witness the physical transformation Wahlberg undertook for this role!

Watch the trailer for Pain and Gain here: