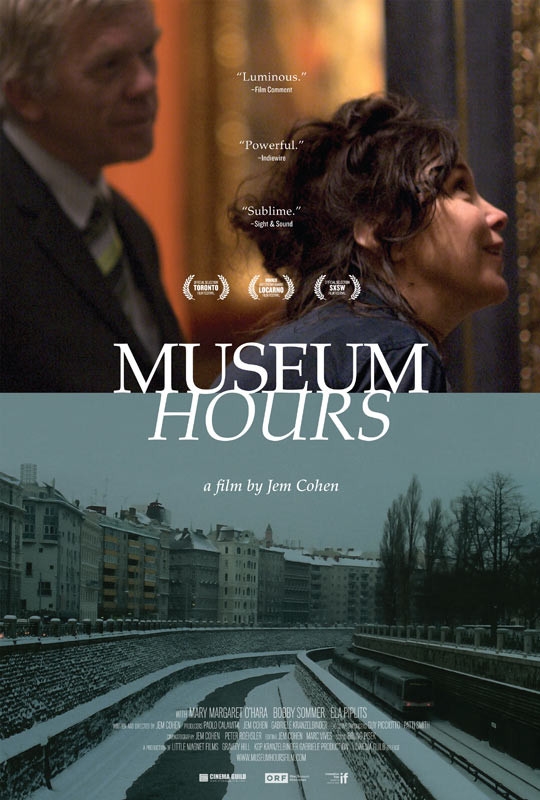 Directed from his own screenplay, the slight plot of Jem Cohen’s delightful film follows Anne (Margaret O’Hara), who visits Austria owing to a family emergency. With a lot of time and little money Anne begins to explore Vienna, particularly the stately Kunsthistorisches Art Museum, where she encounters amicable guard Johann (Bobby Sommer), who offers her assistance. As they spend more and more time together, the film follows their connection, their conversations about the museum’s art, the city’s history, and other such themes. If, so far, Museum Hours sounds pretentious, that’s only because you’ve yet to be convinced that it does possess a greater importance – but rest assured, the film is a wholeheartedly unique and thought-provoking meditation on the grand themes it professes to explore.

Museum Hours is at its best and most enjoyable when Cohen deliberately eschews conventional cinematic storytelling techniques and incorporates his self-confessed inspiration from paintings in his visuals. He presents us with shots and scenes that repeatedly toy with audience expectations and the result is affectingly memorable. An early example can be seen in the establishing shot of Johann at work, and then later in the disquieting tonal shift caused by the subtle changes to the soundtrack of a point-of-view shot in a hospital corridor. Or, in one of the film’s direct musings on art, when a lecturer talks engagingly, and at length, to some viewing tourists about various works of Pieter Bruegel the Elder.

Of course, the whole film hinges on the principals, and aided by Cohen’s rejection of stereotypical characterisation, both Anne and Johann are calm, pleasant, and wonderfully charming company to be in. The fact that both O’Hara and Sommer are non-professional actors unarguably contributes towards the authenticity of their performances, which are both completely devoid of pretense. In fact, throughout the film, save for a surprising and yet somewhat appropriate nude scene reminiscent of 2012’s The Master, you seldom feel as if you’re experiencing something other than a documentary.

It’s likely to be several worlds away from anything else you’ve caught on the big screen this year, but that is exactly what Cohen has strived for, and largely, he succeeds.