Rush premiere: A chat with the cast on the red carpet in London 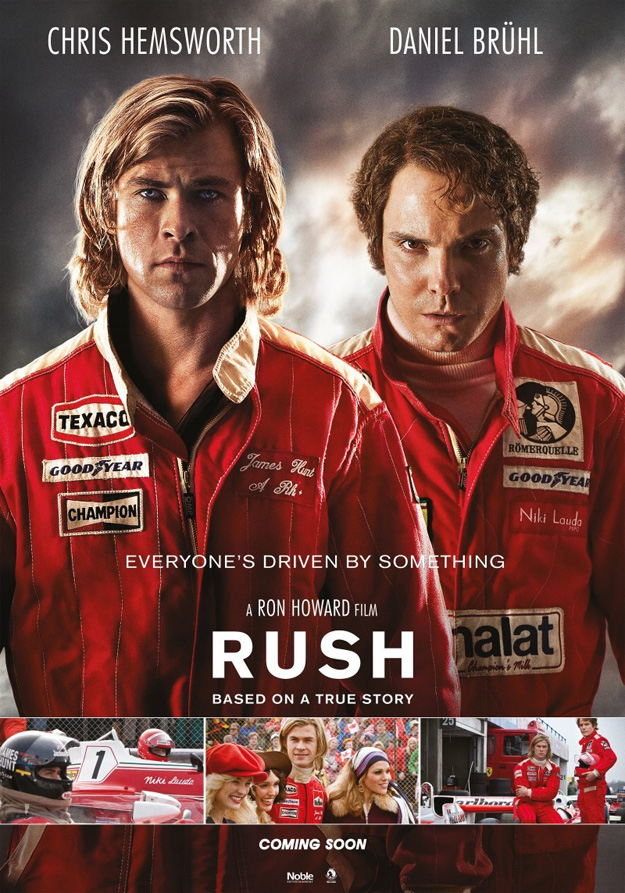 Rush premiere: A chat with the cast on the red carpet in London

Over the roaring of race car engines and excited fans, Ron Howard and the cast of Rush take to the red carpet at Leicester Square for the London premiere of the Formula 1 flick.

Along with the esteemed director, The Upcoming spoke with screenwriter Peter Morgan, and the cast, including the critically-acclaimed Daniel Brühl (as F1 legend Niki Lauder), Olivia Wilde (who portrays the infamous model and estranged wife to James Hunt), and Romanian-born, German native Alexandra Maria Lara, who stars as Niki Lauder’s love interest and wife. Peter, what were some of the difficulties you encountered writing this screenplay?

Peter Morgan:  The difficulty is can you write something that both convinces the aficionados that it’s for real and at the same time entertains people as a commercial movie?  That’s the really tricky thing – maybe you can go very small and forensic and write an intense analysis of Formula 1 or you can write a cheesy Hollywood blockbuster, and the trick is to see if you can combine the two in a way that satisfies people as a human drama and as a Formula 1 story.

And how do you feel the cast did with your script?

PM:  I think the cast was pretty extraordinary.  By making it as an independent film, mercifully, we didn’t have to go after mega names: they didn’t say Brad Pitt as James Hunt – that would have made it very expensive and absolutely impossible.

Alexandra, what attracted you to the character of Marlene?

Alexandra Maria Lara:  There were so many attractive things obviously.  I don’t know an actor or actress who wouldn’t love to be on the set of Ron Howard but specifically about Marlene Lauder, it’s such a gripping story.  I knew about Niki Lauder but I never heard of the rivalry between him and James Hunt and it was such a pleasure to explore.  The focus is on the two men but I think the women in the background are also quite important to get the audience feeling who these men were in their private lives.  I had fun exploring that.

Olivia, what was most exciting about portraying Suzy Miller?

Olivia Wilde:  Other than the clothes?  No, it was working for Ron Howard.  You know I think joining this film and this incredible story, I have so much respect for all the people in this story.  I think they’re just extraordinary human beings and I’m really just excited that Ron was making this film and Peter Morgan wrote this sensational script that’s so emotional and thrilling.  I knew nothing about racing, I didn’t care about the racing but I liked everything surrounding it: the excitement, their competitive nature and everything they were willing to do for their sport.

What was the hardest part about it?

OW:  It was hard because I wanted to do Suzy justice and to nail the accent, and I wanted to make sure that I could portray that level of glamour that she did.

Daniel, was it hard for you to play a real-life character and someone who is so famous in the sport?

Daniel Brühl:  It freaked me out completely at first.  I’m German and in Germany Niki Lauder is huge – he’s a living legend, he’s an icon and he’s so different to me that I had to learn all sorts of things.  So first of all I did an open free course on how to drive these race cars.  I spent over a month in Vienna to get the accent right and then I was waiting for the call and Niki is as undiplomatic as in the movie, so the first conversation was like “Yeah I guess we have to meet now.”  And I said “Well, that would be helpful…” and [Lauda said] “In case we don’t like each other, you can piss off right away”… it made me a bit nervous. What was it like working with Ron Howard and fake racing?

DB:  You can’t ask for more as an actor.  Maybe it’s because he was an actor he knows what you need and gives you the right amount of support or confidence.  And also the way he treats everybody else on set, he has that authority and you never doubt that… and he’s so energetic, his energy and enthusiasm are so contagious.

And Aussie Chris Hemsworth, how did you find working with him?

Oh terrible, every moment, it was a nightmare.  No it was great working with him honestly, the most adorable guy, laid-back, we both got along with each other so well.  In fact, we invented our own romantic comedy about Hunt and Lauder – maybe we should shoot that as well.

Ron, what about Peter Morgan’s script drew you in?

Ron Howard:  The characters first and foremost – the relationships, not only between the two rivals, which is of course is sort of the centre, but also the relationships away from the track and what they revealed about these individuals.  Sure their bravado, their sexiness, their willingness to gamble and take risks but also the insecurities that they would only maybe reveal to the women in their life.

And what about the racing stunts?

RH:  We had a few unexpected stunts, and those were a little frightening and fortunately nobody got hurt but we did get them on camera – that’s the good thing.  We planned very carefully as you do with a movie, and then in places where we needed more intensity than we could safely achieve, well that’s where we stepped up and used modern technology, CGI and other things. And we really looked at not only the key crashes from the movie but we were sort of forensic about looking at Formula 1 crashes from the era to try to get as much of that detail.  By the time the crashes were happening, I didn’t want them to just be spectacle.  I want you to be so involved in the characters that it’s like an extension of the emotional side of the story.

Was it hard to get the 70s feel so accurate?

RH:  That was the most fun part! Certainly it was challenging.  You know, the girls loved wearing those clothes, the guys loved the girls wearing those clothes, and there was kind of a free, sexy, period of excitement and possibility.  And some of the drivers from that period like to say that Formula 1 in the 70s – that was when sex was safe and driving was dangerous.

How important was the casting?

RH:  Casting is always vital, particularly in a character piece.  Even though this has action, I hope people find it surprisingly cool and intense, but at its heart, it’s a story about relationships.

Watch the trailer for Rush here: