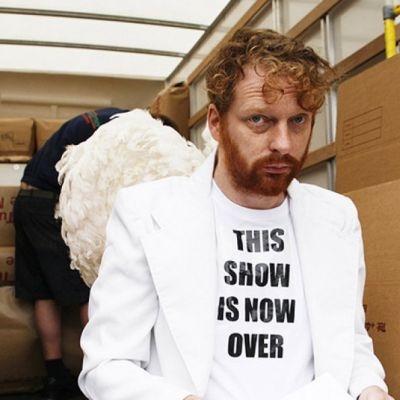 Knock2Bag have made a name for themselves in the stand-up comedy world by putting on nights that sit snugly between amateur hour down your local and the big sell-out tours of the top name comedians. On their website they promise ”Big Names & Upcoming Talent”, and with past events featuring Tim Key, Stewart Lee and Shappi Khorsandi, it’s certainly no lie. They won the Chortle Awards in 2010 for best large and small venue and were recently recommended by TimeOut.

The venue had a slightly thrown-together feel; Rich Mix boasts a cinema, an art gallery and a theatre alongside a couple of multifunction rooms and Knock2Bag were set up in one of them. Having to sit on a cheap foldout chair for nearly three hours – longer if you’d turned up at 7.30 when the doors opened – was not an entirely enjoyable experience, and the toilets were small enough to ensure long queues between acts. Music blared obnoxiously loudly during these breaks and before the show too, which gave an unnecessary club vibe and forced shouted conversation.

There were seven acts including the MC on the bill, and for £12 a ticket it was great value for money. A few of the performances were a little rough around the edges: successful duo Oram and Meeten missed the mark completely and their set was almost torturous, but still garnered a few laughs.

The absolute highlights were the MC (Ed Gamble) who proved to be just as witty and enjoyable as any of the other acts with top notch audience interaction, including putting down a heckler swiftly and with aplomb.  The third act was the top-billed Kim Noble – a strange place to put the biggest name in the line-up maybe, but the hilarity of his deadpan, almost maudlin narration of an adult-themed accompanying video was original to say the least and really got the audience going. Last to perform was Liam Williams, and his rambling, poetic prose style lulled you into a false sense of security just before each rock solid punch-line took hold. It would have been easy to listen to him for an hour, though whether your sides would thank you for it is another matter.