Joseph and the Amazing Technicolor Dreamcoat at New Wimbledon 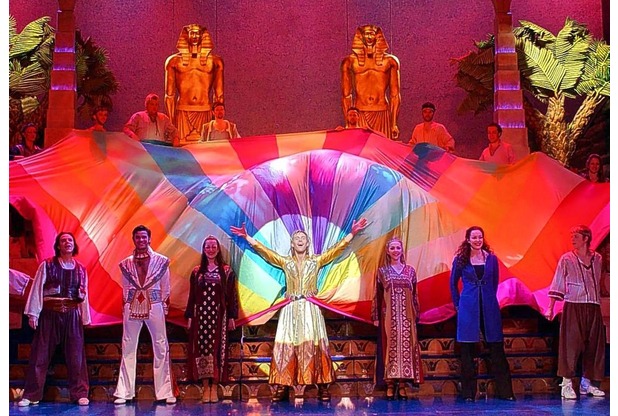 There are few who are unable to hum a tune from this musical by Andrew Lloyd Webber and Tim Rice, especially after the revival reality TV show, Any Dream Will Do. Joseph and the Amazing Technicolor Dreamcoat is now in its third year of touring, with the title role of Joseph being filled by Ian “H” Watkins, former member of Steps. There are many children in the audience and the whole show is designed with them in mind: a children’s choir sits on-stage, the cast all wear wide smiles, and comic elements have been thrown in to give a pantomime feel.  The stage is very colourful, with big cartoonish sets in the shapes of sphinxes, palm trees and pyramids. Outlandish costumes adorn the singers – varying from skimpy, spangly skirts (even for the men) to flowing robes.

Ian “H” Watkins is bouncy and fun to watch, but his singing is not as good as it should be. Every note sounds like an effort, stretching the sinews in his neck. He over-enunciates every hard syllable and there is too much rubato so the flow of the very familiar melodies is lost. The rest of the cast is impeccable: the group of brothers display incredibly tight vocals and choreography, working completely in unison. Jennifer Potts is stunning as the narrator, like the kind and gentle primary school teacher every child wished they had. Her voice is powerful and versatile and she gracefully weaves through the onstage action as the storyteller, observing and not interfering.

There is some sing-along from the audience and lots of people dancing in their seats or even standing up during the many, many false endings and encores. The children seem to love it, and even a few parents hum Go, Go, Go Joseph as they leave the auditorium.

Joseph and the Amazing Technicolor Dreamcoat is a very silly musical thanks to its fusion of musical genres (encompassing disco, rock ‘n’ roll and calypso), its arch-campness and some extra ridiculous directorial touches, like inflatable sheep and a giant talking camel. An exercise in biblical hermeneutics this is not; a charming children’s romp, however, it very much is, and this production emphasises all its strengths to provide a visually dazzling, funny and heart-warming musical experience.

Joseph and the Amazing Technicolor Dreamcoat is on at the New Wimbledon Theatre until 2nd November 2013, for further information or to book visit here.