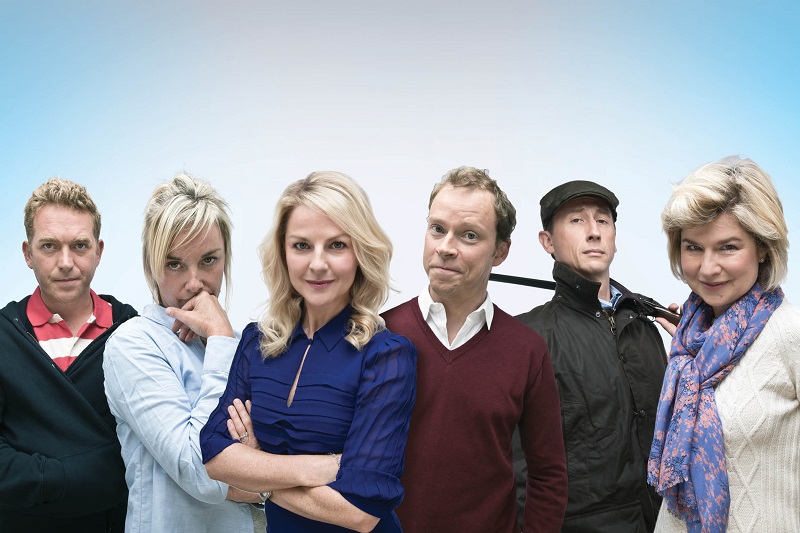 The story unfolds in a remote Welsh cottage where the “friends” have gathered for a retreat-like getaway from city life and their children.  What begins as an idyllic scenario soon erupts into chaos when a few added ingredients and home truths are thrown into the mix.

The three couples, each a carbon stereotype of the class they represent, are beautifully exaggerated to emphasise their unique personalities. In a hyper-real case study of the British classes there is the overworked, hysterical lower-middle class couple, a new mother, Briony (Tamzin Outhwaite, Eastenders) desperate for perfection in motherhood, and her down-trodden partner Keith (Barnaby Kay), struggling to deal with Briony’s erratic behaviour.

Raving’s one and only shortfall is its seeming attempt to mimic a television soap opera. The overuse of bad language, slap-stick fighting and two additional (perhaps unnecessary) characters, Tabby (Bel Powley) and farmer Morgan (Ifan Huw Dafydd) bring the intellectual level down to somewhere in the region of Eastenders. Both Tabby and Morgan’s roles in Raving seem to do nothing but highlight the couple’s failures, and act as a catalyst to their destruction.

Hampstead Theatre is the perfect intimate situation for this peek into the couples’ lives. The play is set in an uncomplicated depiction of a Welsh kitchen/living room, with few props to distract the audience from the tremendous talent on the stage.

As the most plausible couple, Serena and Charles steal the light with their hysterical banter.  But as actors, there is no denying Outhwaite, Webb and Hadland really are top-quality casting.

Is it Raving mad? Well, you would be not to go and see it!

Raving is on at Hampstead Theatre until 23rd November 2013, for further information or to book visit here.