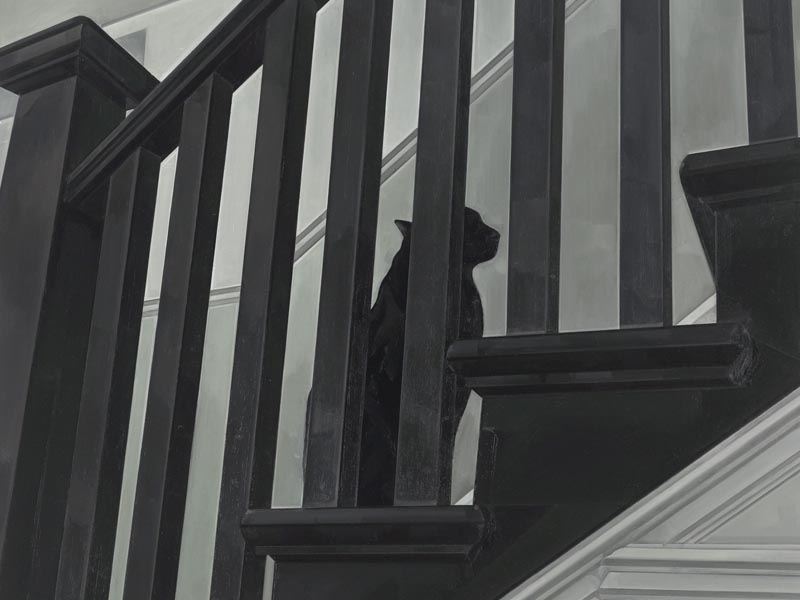 Incongruous title aside, the diversity of the five artists whose work makes up Painting Now and their presentation of varying techniques, styles and approaches to modern art accumulate as a breath of fresh air. The only fly in the oil pigments is the slightly restrictive misnomer. The work in this exhibition is timeless – it’s a shame it is collected under the supposition that it is solely of the present moment. Take, for example, the misaligned landscapes offered by Simon Ling, the result of imagined rural and urban fabricated scenes dreamt up in the confines of his workshop or traditionally painted while exploring East London and the countryside. His aim to create work that expresses the emotion he finds within a setting, be it real or imagined, gives a grounded yet abstract air to his paintings – they seem almost temporary thanks to the fleeting moment he has captured on canvas.

Previous Turner Prize winner Tomma Abts displays some characteristically abstract works; her technique of allowing a painting to intuitively find its own form as she layers paint across canvas in neatly lined designs finds expression forged on constriction itself.

Lack of narration and the focused formulation of a world confined within the canvas it thinly lies upon sings in Gillian Carnegie’s work. The traditional still life form that her pieces echo is given a hauntingly momentary demeanour by their near-monochrome assault on convention. It’s a strange contrast, then, to enter the next room, dominated by a huge, oil-painted sculpture entitled Loos House by Lucy McKenzie – an artist who combines fine art with fashion, craft and a variety of other strings in a bow that fires varied allegorical techniques exactly where she intends.

Bridging the no man’s land between sculpture and painting, Catherine Story rounds off the exhibition with a series of works in a variety of different media. Her pieces emulate each other while still standing individually– there’s little divide between her three-dimensional work and paintings, all resonating fluidly regardless of form.

Timed neatly with the unveiling of the overhauled Tate, this exhibition perfectly emulates the constant development of art in beautifully diverse ways that harmonise perfectly as a whole.