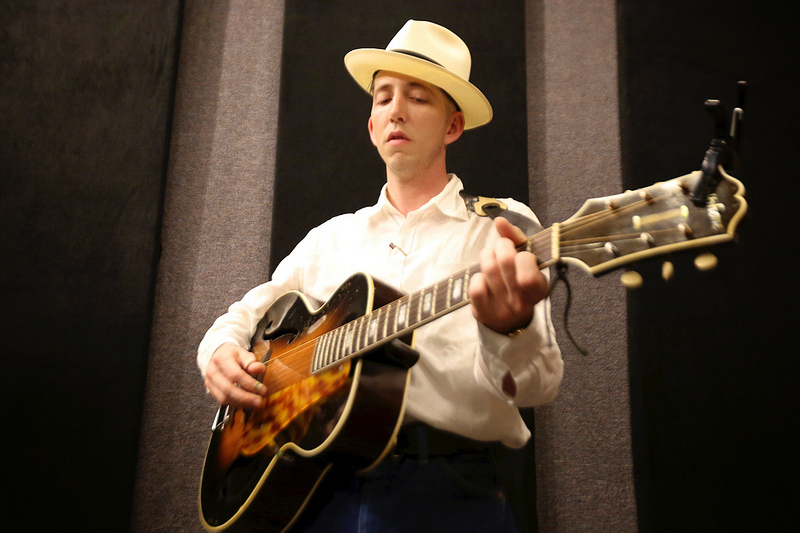 Last night’s show at Rough Trade East was a relaxed introduction to what Pokey Lafarge is all about, and a chance for the band to mess around and have fun before their main gig at Scala. The warmth and vibrancy of their performance meant this in-store live set was a real joy, as LaFarge and his five-piece backing band strutted their stuff, demonstrating their wealth of musical talent. Lafarge has progressed a fair bit in the past few years: after winning the Independent Music Award for Best Americana Album two years in a row, he went on to sign for Jack White’s Third Man Records. Over the past year he has toured all over America and Europe, and released a self-titled album on the label. Hailing from St. Louis, the band are reminiscent of 1930s America, clad in loose-fitting, wide-trousered suits, waistcoats and shiny shoes. LaFarge himself cut a very distinctive figure on Brick Lane; pale-faced with carefully parted hair, he spoke with a Southern drawl and exuded a smooth, calm demeanour to go with it. But not only do LaFarge and his band look the part, they sound it. The music performed was a carefully crafted mixture of early American jazz, string ragtime, country blues and Western swing. Their cover of Jack Guthrie’s version of Oakie Boogie (considered one of the first rock ‘n’ roll records) was fabulous.

Defying the weather outside to fulfil a fan’s request, they proceeded to play City Summer Blues, comprised of country blues guitar riffs and a jazzy beat. They followed it by setting a more fitting seasonal tone with the song What the Rain Will Bring from their new self-titled record – a softer, more melodic number with LaFarge’s warm vocals dominating, crying out: “Way back in old ’93 the Mississippi had its way with me, oh you just never know what the rain will bring”. The song Let’s Get Lost is a beautiful sleepy number that deserves notable mention as it demonstrated the variety to Lafarge’s music and his ability to scale different genres.

There was time for one last request and one more song, and they closed with Drinkin’ Whiskey Tonight, leaving everyone feeling more than a little intoxicated by it all.