Twelve Angry Men at the Garrick 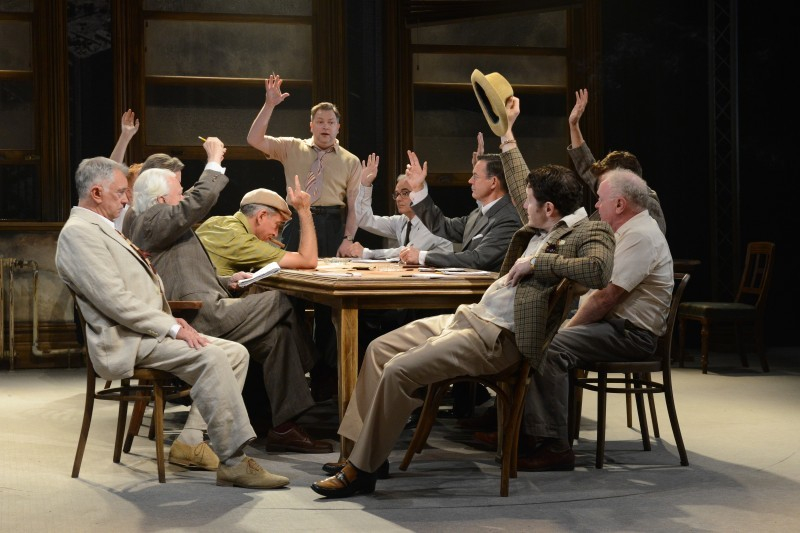 Reginald Rose’s play is now approaching its 60th birthday and, while it remains a taut and engrossing piece of writing, its relation to reality is waning. Still, even if the jury today were to be more diverse in terms of gender and ethnicity, it is hoped that opinion among them would be as varied as it is among these 12 New Yorkers who must decide whether a 16-year-old accused of murder should be executed.

The 1950s Manhattan setting is convincingly realised by stage designer Michael Pavelka. Everything is brown or beige, as if seen through a sepia filter, and dusty sash windows with lopsided Venetian blinds look out to the New York skyline. The colours and atmosphere convey the stifling heat of the room in which the jurors decide. With all 12 cast members on stage throughout the performance there is no lack of action, even if the pace drops from time to time. The actors inhabit their different roles well, making each character distinct from a bunch of indistinguishable middle-aged men in suits. Nick Moran as Juror 7 and Robert Vaughn as Juror 9 roll out the comic lines, while Jurors 3 and 10 (Jeff Fahey and Miles Richardson) are quite obviously the antagonists. At times the division between which characters are good (those who are willing to accept different points of view) and those who are bad (the stubborn ones) is too obvious and exaggerated, with the bad ones relying on shouting as loudly as possible. There are a few mediocre accents from some actors, which are distracting at times, but there are some excellent performances – particularly from Richardson who, with a cigar glued to his mouth, is an annoying, intransigent, opinionated bully.

Christopher Haydon’s direction is clearly meticulous, making good use of the 12 people on stage, ensuring they move around and interact, and generally keeping the audience engaged. Overall the play chugs along pleasantly, building slowly and absorbingly to its conclusion.

Twelve Angry Men is on at the Garrick Theatre until 15th March 2014, for further information or to book visit here.