Turner & the Sea at the National Maritime Museum 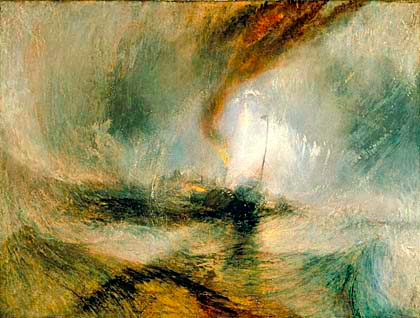 Turner & the Sea at the National Maritime Museum | Exhibition review

Cold easterlies pounded the Greenwich docklands on a grey November morning. But refuge from the weather could be located inside the National Maritime Museum which is fittingly exhibiting the work of J M W Turner (1775-1851). The exhibition contains Turner’s most celebrated seascapes that span some 50 years of his life and demonstrate his development as an artist; an artist who experienced the constant lure of the sea. The exhibition is a journey into the vast, deep-blue recess of Turner’s art and mind, a carefully curated exhibition that deals with the history of the relationship between Turner and the sea in some detail. The sea was Turner’s principal fascination. For Turner the sea is a spectacle of great terror and wonder, both a site of contestation and contemplation: the grand setting where wars were won and lost, the all-encompassing sea that demonstrated nature’s hold on humanity and the dark unending expanse that spoke to the soul. This exhibition encapsulates Turner’s varied approach to the sea, venturing out from his early oil paintings that followed the Dutch 17th century tradition of maritime painting with its dramatic grandeur and dynamic command over colour. It was a genre Turner could play around with, as his early oil paintings show his trademark vivid whiteness of the breaking waves. As this exhibition displays, Turner was first and foremost an innovator wanting to push the boundaries of the rigid marine art category that existed at the time and proceed onward into uncharted waters. This personal pursuit coincided with the Britain’s own struggle in the Napoleonic Wars and the pivotal Battle of Trafalgar that was a showcase of naval prowess. A battle that Britain would win, and Turner would later be commissioned by George IV to mark the victory through his art. The drawings and watercolours in his sketchbook that was left to the nation as the Turner Bequest illustrate his restless unending relationship with the sea. From his engagements with the sea on issues of national identity to his more understated undertakings, Turner demonstrates an assured romantic endeavour through placing the artist as intermediary between the viewer and the outside world, as Now for the Painter, with its witty title, shows the insertion of the artist into the scene. The myth of Turner strapped to the mast of the ship was a powerful one. His engagement in his art with the elements would suggest such a myth to be reality. From Snow Storm – Steam-Boat off a Harbour’s Mouth to his depictions of the calm stillness of the sea in other paintings, the exhibition demonstrates Turner’s intimate engagement with the elements, that are in constant flux.

By the end of the exhibition one has engaged, as Turner did, with the calm that precedes the storm and with the sudden squalls; from the sea’s most violent episodes to its most tranquil.

Turner & the Sea is at the National Maritime Museum from 22nd November 2013 until 21st April 2014, for further information visit here.