Panic! at the Disco at the Forum 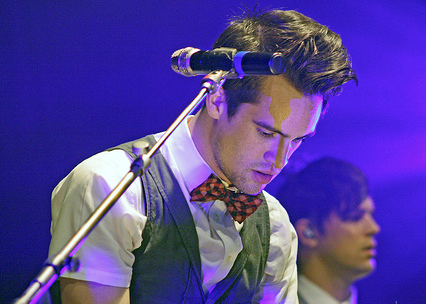 Panic! at the Disco at the Forum | Live review

Watching a Panic! At the Disco gig is an assault on the senses. Even in the depths of The Forum there is no escaping the blinding lights and deafening screams of teenage girls exploding with excitement at every calculated flick of lead singer Brendon Urie’s head. Panic! at the Disco is a band that can do no wrong in the eyes of their fans. Every song they play is met with a wall of screams and every lyric is shouted back at the stage so furiously that the gig has a bizarre fan surround sound. This is a huge problem for anyone who actually wants to hear anything, but Panic! seem too concerned with strutting around the stage and posing with each other to worry about sound quality.

Flitting in and out of albums, the band manages to cover a fair amount of their back catalogue. But they work through the set like a steam engine, blurting out song after song like a jukebox. This Is Gospel, from new album Too Weird to Live, Too Rare to Die! is a potential anthem that is let down by an overpowered vocal. The band are joined onstage by LOLO for a performance of their new single, Miss Jackson, LOLO’s contribution is, if anything, a welcome moment of variation.

Lying Is the Most Fun a Girl Can Have Without Taking Her Clothes Off is genuinely enjoyable to watch, and I Write Sins Not Tragedies is an energetic finale; perhaps these early songs are better suited to being belted out amid flashing lights and pounding drums.

Between songs there is surprisingly little interaction. Besides an embarrassing emotional gushing to his fans the only nugget of emo pretension the audience are treated to is Urie’s introduction to Hurricane: “I fell in love with the stars, until they came crashing down in what I call a whirlwind hurricane.” In Urie’s defence, the crowd lap up every word and their head splitting screams only intensify.

Underneath the layers of shallow faux-rock glam and ridiculous stage antics (cue Urie shedding his silver jacket and performing a backflip) there are some enjoyable moments and they are clearly talented musicians. It’s a shame they are so obscured by an overbearing production of smoke and mirrors.

For further information about Panic! at the Disco and future events visit here.