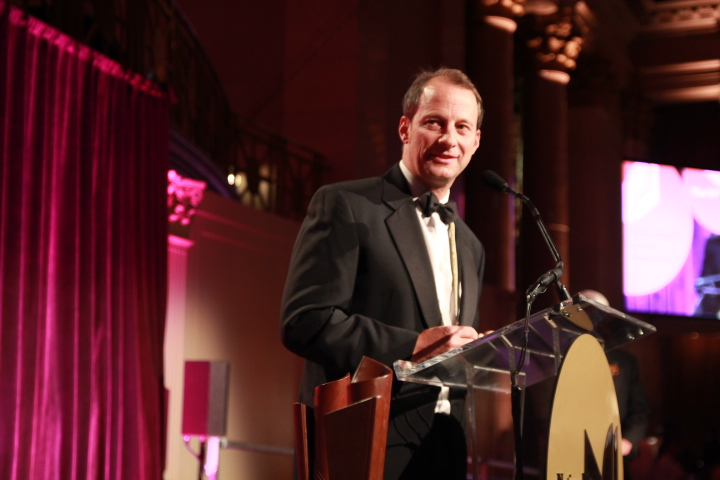 Literary fans and press crowded the Cipriani Ballroom on Wednesday night for the 84th annual National Book Awards. Located on Wall Street in Manhattan, literature’s bright stars and leading figures were in attendance for the so-called Oscars of the literary world. The event awards authors in the fiction, nonfiction, poetry, and young people’s literature categories. Hosted by Mika Brzenzinski, co-anchor of MSNBC’s Morning Joe, the night kicked off by honoring Dr Maya Angelou with the 2013 Literarian Award for Outstanding Service to the American Literary Community (presented by Toni Morrison)  and EL Doctorow with the 2013 Medal for Distinguished Contribution to American Letters (presented by Victor Navansky). Dinner then followed for a brief interim while staff prepared the presentation of honors. First, the Fiction Award went to James McBride for The Good Lord Bird, a book telling the story of a young boy born a slave who joins John Brown’s antislavery crusade—and who must pass as a girl to survive. George Packer was next, winning the Nonfiction Award for The Unwinding: An Inner History of the New America, a book detailing the crisis in America through the eyes of its citizens. Mary Szybist took home the award for poetry with Incarnadine: Poems, while Cynthia Kadohata received the Young People’s Literature Award for The Thing About Luck, which follows a young girl and boy stuck at home with their old-fashioned grandparents for a summer, and the fun they make out of it.

David Steinberger, director of the National Book Foundation, wrapped up the ceremony for the evening, but not before informing guests of the after-party on the ballroom mezzanine. Attendees were invited to enjoy drinks and dancing as the evening drew to a close, marking another successful evening for the literary world and the National Book Foundation.

For further information about the National Book Awards visit here.