Jumpers for Goalposts at the Bush 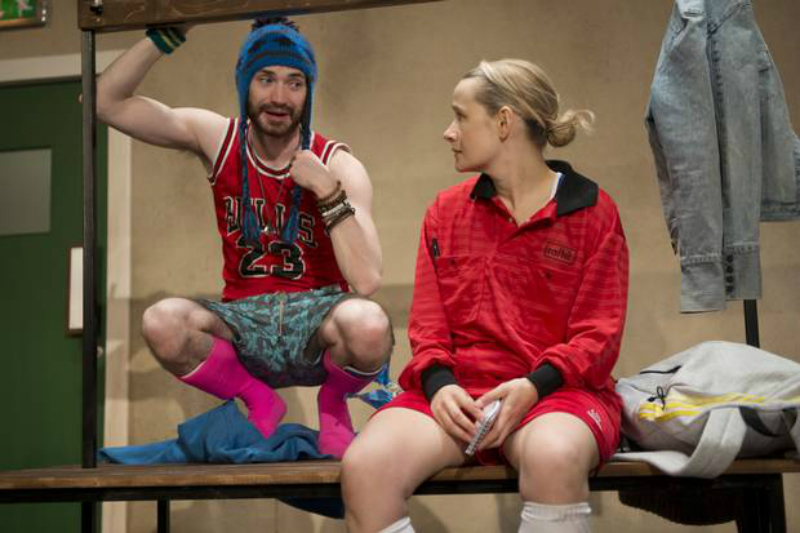 Jumpers for Goalposts at the Bush | Theatre review

An ordinary changing room is where Jumpers for Goalposts unfolds. The set is reproduced accurately, most spectators will be familiar with such places. It could be at school for a curricular activity, in a sports centre or a random field near home where kids and adults alike spend their leisure time. Everyone can say they’ve been in one of those poorly maintained facilities. Usually essentially decorated and often neglected, a changing room is unexpectedly fitting as a place to exchange jokes, opinions, share laughter or pain. The walls are permeated with the lives of those who pass by, exuding the energy captured from those who leave their marks there. In Jumpers for Goalposts we sneak little by little into the existences of Luke, Danny, Joe, Geoff and Viv, as they set up a football team and compete in a tournament.

James Grieve directs, sticking to the original instructions of playwright Tom Wells. Every gesture is studied but in the end it’s really up to the actors to make them look authentic. The cast overall does a good job; Philip Duguid-McQuillian however earns a particular mention for portraying his character in a most genuine manner. He is Luke, a 19-year-old clumsy, shy boy – still struggling to establish his own identity, which is why he clashes with Danny when the latter confronts him on a thorny topic. Luke is excellently and sympathetically depicted through a series of expressions and tics that expose his weaknesses.

The best feature of the play is that it is ridiculously funny. It explores more or less important themes with intensity, but the script is full of hilarious lines that make even the heaviest subjects more approachable. Its light-hearted attitude doesn’t affect the serious bits – there are touching scenes, both positive and negative, that cause the audience to hold their breath. At times the emotions feel a little contrived and some more space could have been agreed to the other characters (Luke and Danny’s stories orchestrate the play), but the laughter makes up for it.

Jumpers for Goalposts is on at the Bush Theatre until 4th January 2014, for further information or to book visit here.

Watch the trailer for Jumpers for Goalposts here: