Once a Catholic at the Tricycle 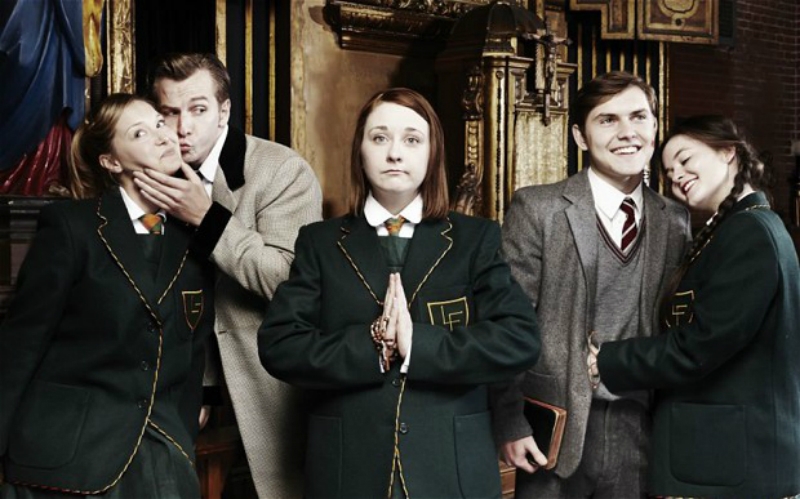 Once a Catholic at the Tricycle | Theatre review

Mary O’Malley’s story of adolescent girls in a convent school in the 1950s is revived at Kilburn’s Tricycle Theatre, directed by Kathy Burke – herself a convent school alumna. The production has a bright design; gables with neon-lit stained glass hang over the stage, their vivid colours contrasting well with the drab greens and browns of the school uniform and desks. Music is peppered throughout the play, but the first sound we hear is plainchant, a familiar noise to anyone from a Catholic school. This sets the tone for the production: those who appreciate it most might be from Irish or Catholic backgrounds. Much of the humour in the play comes from nostalgic details; like the girls reciting the Hail Mary quickly, rhythmically and unthinkingly, or the smug superiority of Mary Gallagher (Katherine Rose Morley) who knows what “the sin of Sodom” is when her friends do not, or the way that Mr Emmanuelli (Richard Bremmer) identifies students in his class – “you there, the one with the hair”.

The characters are larger than life, their eccentricities and exploits enlarged by memory and the inaccuracies of hindsight, as they are when old friends reminisce about their school days.

The cast is excellent, almost without exception. Sean Campion as Father Mullarkey peppers his nervous energy with moments of creepiness. Amy Morgan as Mary McGinty and Katherine Rose Morley as Mary Gallagher play convincing 15-year-olds. But the best performance by far was from Cecilia Noble as Mother Peter. Her comic timing was perfect, the range of intonations in her voice was hilarious and her retelling of the story of Our Lady of Fatima had the audience ring out in peals of laughter.

It is interesting to see a production so rooted in Catholicism that is light-hearted and not completely condemnatory. The story is told with a mocking fondness, even if it does highlight the complete inadequacy of the nuns in equipping the girls for real life. For those raised on it, being reminded of the travails of a Catholic school will be entertaining: the innocently literal interpretations of church teaching by the children; the reinforcement of the idea that you are probably going to hell; the endlessly periphrastic ways that Catholicism finds to talk about sex. Burke’s direction, the witty script and great acting ensure a brilliant comic performance for any audience.

Once a Catholic is on at the Tricycle Theatre until 18th January 2014, for further information or to book visit here.