The Night Before Christmas at the Soho 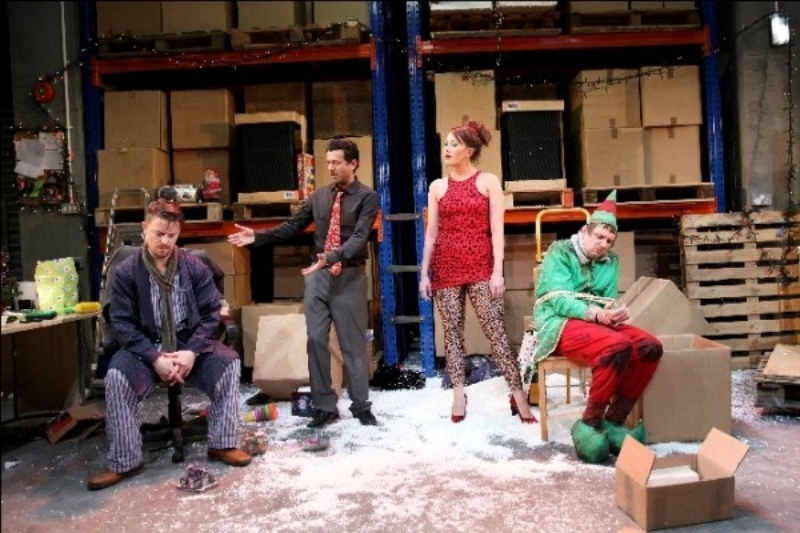 The Night Before Christmas at the Soho | Theatre review

A cross between a pantomime, The Office and Eastenders, The Night Before Christmas is a hilarious and foul-mouthed celebration of everything that is wrong with Christmas – the jaded routine, the meaningless exchange of unwanted gifts and the loss of that magical Christmassy feeling once you have grown up. Set in the least glamorous corner at the back of a dodgy warehouse, Christmas Eve is disrupted by a mysterious stranger in an elf costume. Either he is a bit of a nutter and an opportunist thief, or a real elf – and Christmas itself is at terrible risk if he is not let go.

The small cast play their parts with relish, and it’s wonderful when they break into song, often a filthy tirade of their innermost cynicism. The lyrics, co-written by Anthony Neilson and Steve Marmion, are fast, clever and very naughty.

Gary, played by Navin Chowdry of Teachers, is a bit of a dreamer, and although his life has become a series of half-hearted failures, he still wants to believe in everything until proven wrong and hopes to persuade his mate Simon that the elf is real. Simon, played by Craig Kelly of Queer as Folk, is a self-confessed horrible git who only expects the worst of himself and other people.

And then the elf speaks. Oh what a strange creature is Craig Gazey’s elf!

Once Cherry the “prossie”, played by Rebecca Atkinson of Shameless, blasts onto the scene in a wobbling storm of rage and aggression, things come to a head. Wishes may be involved in letting the elf go and saving Christmas, but what do these people really want, and can they think beyond all their broken dreams? When Cherry expresses herself through the medium of dance, we laugh at the irony, but can’t help finding it moving.

The audience ends up wanting and wishing the elf is real and not some hopeless junkie. In the most low-key and unlikely setting, could there be a little miracle after all? Could these most damaged and pathetic of grown-ups regain a little bit of that Christmassy feeling?

Really funny, very sweary, occasionally profound and strangely touching, The Night Before Christmas manages to break through its own satire and deliver a bit of Christmassy magic.

The Night Before Christmas is on at the Soho Theatre until 5th January 2014, for further information or to book visit here.