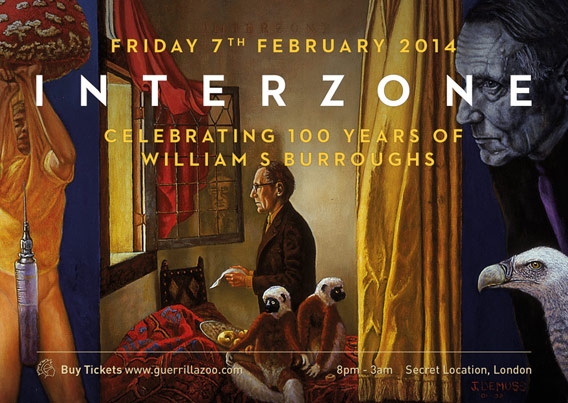 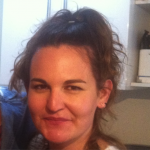 Putting William S Burroughs’ life and work into just one evening was bound to be an unique event. Unsure what to expect and the only certainty – given the theme – was to expect the seedy, the sordid and the downright unusual. With a secret location and a whole host of entertainment lined up this was sure to be an experience like no other.

Guerrilla Zoo are no novices when it come to putting on live events. Other offerings include: Goblin King’s Masquerade Ball: Theatre of Trolls and Panic Sermons, a night that involved exploring high sexual tension and pain thresholds and live snake performances. With that track record what could the revellers possibly expect?

The instructions to Interzone demanded passports (tickets) to enter the make-believe world of “International Zone” in Tangiers in Morocco, where Burroughs was greatly influenced. Told to dress in “citizen attire” – this so-called attire sported by the punters did not disappoint – and that the location was secret just added to the intrigue of what was to follow.

In a bunker in south east London and greeted by forceful soldiers, following their loud and violent instructions,  guests dropped to their knees as they made their way into the Interzone. They were marched down corridors and then led into the main room.  What a way to be introduced to the evening, this entrance surprised yet delighted the entering guests.  Inside, eerie music played throughout this huge venue as people arrived. There were venues inside the main venue with actors to entertain around every spooky corner, face painting and the decor was impressive to say the least – with Barry Hale involved it was no wonder.

Rasp Thorne performed an energetic gothic set with Duncan de Morgan later taking to the decks. Ensuring there wasn’t a moment to be spared, the night consisted of performers, artists, live music and DJs. The ever eccentric model/DJ Lilu Khoas played an impressive set to a hyped-up crowd. One of the many highlights of the evening was Snake Fervor; her circus/cabaret show was hard to take your eyes off. Twisted Cirque whipped the crowd in a frenzy with an electrifying, dangerous and highly skilled chainsaw performance. Civilised Mess were tantalisingly mesmeric and Psychedelic Kidnapping put on a magnificently overwhelming show, which summed up this astonishingly dreamlike and bizarre evening as an effective emotional rollercoaster.

The effort and enthusiasm never once waivered. The whole evening wreaked of passion, intelligence, fun and surrealism – much like the man himself.

★★★★★
Andrew Murray
Read More
Scroll for more
Tap
What’s Love Got to Do with It? at Rich Mix | Dance review
RoboCop | Movie review