Through His Teeth at Linbury Studio Theatre 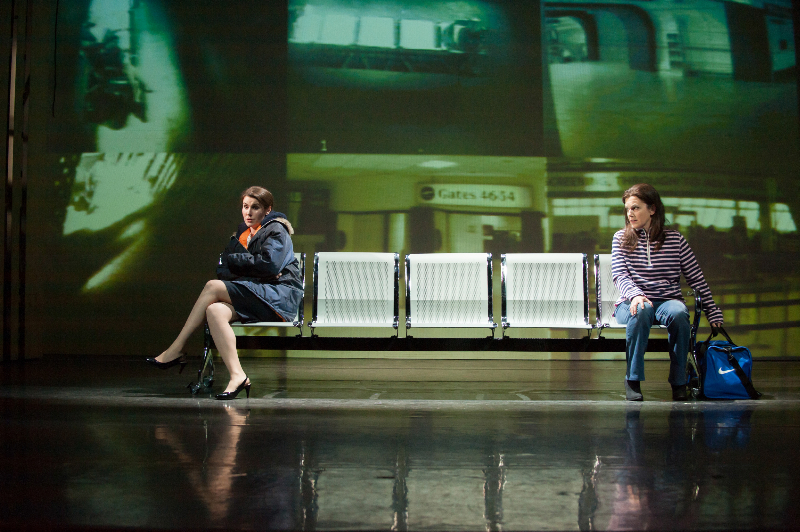 Through His Teeth at Linbury Studio Theatre | Opera review

Faust, the classic tale of a scholar who makes a pact with the devil, has inspired many retellings and works of art exploring the moral issues and dilemmas of getting what you want at a terrible price. The Faustian Pact season at the Royal Opera House includes this opera’s world premiere, a contemporary take on getting drawn into a relationship that jeopardises your very soul. Loosely based on a true story that was in the news just a couple of years ago, car salesman R  weaves a web of lies and manipulation, entrapping several women in his fantasies and fabrications that he is an MI5 agent, living a life of danger and intrigue. In reality he is stringing them along, making them live increasingly paranoid and isolated lives, using them and everything that they have. One of these women, A, is being interviewed throughout the opera, the scenes working as flashback incidents as she recalls how she was seduced by R’s charm, and how she became alienated from her sister, seeing any intervention as suspicious.

The drama itself would work as a play or a film, and the libretto – written by playwright David Harrower – incorporates everyday language and swearing, making the narrative well balanced and rather gripping as we see just how far this woman’s life and identity are lost to the demands of her lover’s personality and deception.

The audience gives a great reception to this new and assured production; it is spare but fills in the imagination with a few seats and props and a video-filled back wall showing the action onstage at different angles, mirroring the world of surveillance closing in on R and A’s world.

Anna Devlin as A delivers the right kind of vulnerability to make the descent believable, and gets to sing the highest of notes. Owen Gilhooly projects the dangerous charm of R, while Victoria Simmonds as both the sister and interviewer shows her versatility.

Opera is an artform that often has to argue for its very existence and prove its relevance – this piece had to be an opera and not a play or a film. As music, it manages to be atmospheric and seductive while still pushing the edges of sound art, becoming increasingly disharmonious as the situation becomes more extreme. Composed by Luke Bedford, it will surely be produced by other opera companies in the future as it contributes both to what opera is and to the enduring moral tangle of Faust.

Through His Teeth is on at Linbury Studio Theatre until 11th April 2014, for further information or to book visit here.

A word and a song with Max Jury at Rough Trade West | Live review
Chloe Early: Suspensions at the Outsiders Gallery | Exhibition review