Into the Woods at the Bridewell 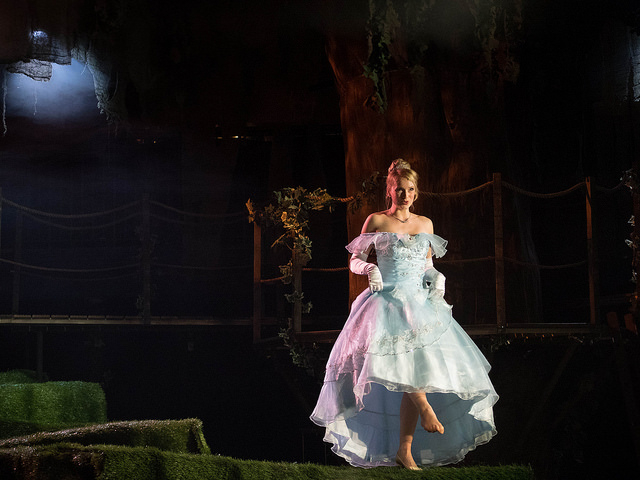 Into the Woods at the Bridewell | Theatre review

Sedos may be the country’s premier amateur theatre company, but there were many moments of real professionalism in their production of Into The Woods. Sondheim’s composition takes Grimm fairytales to their moral conclusions, mixing several familiar tales with darkness and ambiguity, and retaining the brutality of the original stories (Cinderella’s stepsisters cut their toes off to fit in the magic slipper). Each character’s naive wish comes true and by the end of Act One they are all living happily ever after. Act Two delves into the imperfect “ever after” to explore the ideas of responsibility and consequences: it is the old adage “be careful what you wish for” writ large. Musical themes occur and recur to highlight moral themes. Melodic and lyrical leitmotifs appear throughout, producing an intricate structure and a great deal of clever foreshadowing.

It is, then, no simple show for an amateur theatre company to tackle. But Sedos have assembled a strong cast, particularly the charming Lotte Gilmore as Red Ridinghood, and Chris Warner and Sam Harrison-Baker as the princes. Although some cast members were difficult to hear over the full and flawless orchestra (musical director Ryan Macaulay), their limber tongues managed to work through Sondheim’s tricky, tongue-twister lyrics with clarity and apparent ease.

Huge credit must go to set designer Steven King. Plain, flat sets for the houses in the first scene don’t promise a great deal until they fold into fairytale books and reveal a vast and intricate sylvan playground behind – a treehouse par excellence. Vines hang from the rafters, ivy clings to stepladders and walkways, grass stretches out across the stage, and splashes of light and dark provide innumerable entry and exit points to allow the actors to appear as if from nowhere.

Fairytale morality is necessarily black and white, the better to teach children with. Into the Woods is a reminder that as we grow further away from childhood, black and white is no longer an applicable way of seeing the world. Wishes and actions have consequences. The musical charts the revelation from innocence to experience, from love to loss, from the instant pleasure of a granted wish to the inevitable knock-on effects. It is a fantastic and fantastical musical but it is, after all, a musical and Sedos’ production does not take itself too seriously. It does not seek to hammer home the didactic elements. Rather, it has been performed to entertain – and it does this in abundance.

Into the Woods is on at Bridewell Theatre until 12th April 2014, for further information or to book visit here.

Hopelessly Devoted at the Tricycle | Theatre review
The Fashion World of Jean Paul Gaultier: From the Sidewalk to the Catwalk at Barbican Art Gallery | Exhibition review