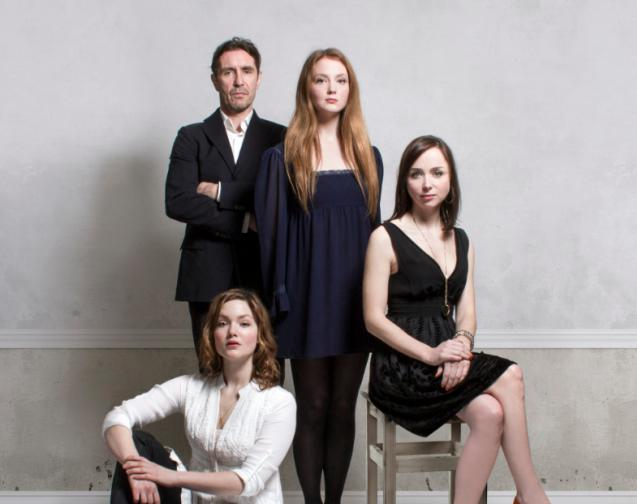 iPhones, expletives and fabulous style – Three Sisters is attacked, nurtured and reborn in Anya Reiss’ modern adaptation and brought into the Middle East. A family stuck miles from home, almost too frightened to attempt going back, with a stage full of people and yet all they talk about is how alone they are. The direction is clever – moving an ensemble cast around a stage without stickiness is a task in itself, but Russell Bolam has guided his cast into this large living area and plays them like chess pieces responding to each countermove of their perceived opponents. The sisters are so together, yet their torn motives and emotions are immediately on the table from the first beat. Olga, played by Olivia Hallinan (known for popular Channel 4 drama Sugar Rush), has a stylised nature to her, which almost seems too concerned with the fact that she’s in a Chekhov play and seemingly struggles to settle in with her very impassioned sisters Masha (Emily Taaffe) and Irina (Holliday Grainger). Their brother’s new wife Natasha, played by the endearing Emily Dobbs, causes an upheaval of power that churns an underlying beat on the stage. Joe Sims’ Solyony is intimidatingly tall and aggressive. His drunk declaration to Irina about his intentions and feelings are abusively uncomfortable – it is a perfect yet gruesome delivery.

Sexism is in play throughout. Solyony’s intimidation, the setting in the Middle East and the fact the sisters don’t leave because they feel they can’t without gambling addict brother Andrey (Thom Tuck). Despite their modern empowerment they still struggle with their assumed suppression. The set (Anthony Lamble) is gracefully placed and the main focus of the door plays so high, it hangs over the cast like an encompassing prison suffocating their self-obsessive individual natures, which just emphasises the irony of their need to leave. The choice is clearly in front of them.

Unfortunately, Act Two’s pace has far too much unjustified air between lines and a complacency settles into the atmosphere and the drive, and reasons muddle themselves. Three Sisters is definitely far more accessible in Reiss’ version, with Chekhov’s text certainly more fluid, and the cast punch the themes in pinging choice lines. But something a little bolder, you’d think, could have worked its way onto the stage in this highly hyped adaptation.

Three Sisters is on at Southwark Playhouse until 3rd May 2014, for further information or to book visit here.

The Fashion World of Jean Paul Gaultier: From the Sidewalk to the Catwalk at Barbican Art Gallery | Exhibition review
Mary Epworth at the Lexington | Live review