Birdland at the Royal Court 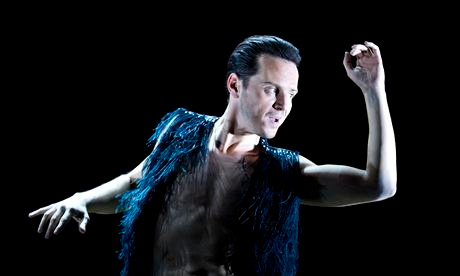 Andrew Scott plays an obnoxious and vacuous rock star at the beginning of Birdland; during the play he is obnoxious and vacuous, and by the end he becomes…obnoxious and vacuous. Scott is brilliantly magnetic and convincing as singer Paul, who spends years of his life on tour and increasingly loses his sense of self and reality. Perhaps the bells and whistles that are pulled out in the later stages of the play mirror that, but there is little psychological depth explored other than bad behaviour from someone who can’t help himself. There are some stylish and theatrical production choices, which are enjoyable before they turn rather random and ridiculous. Visual props and lighting are almost another character in the play, but the story is about the crumbling personal world of someone who is cursed with getting what they want and can no longer relate to the concept of not being a multimillionaire. The scene with Daniel Cerqueira playing Paul’s father seems the most genuine and poignant encounter in the play.

Birdland is undoubtedly a stunning showcase for Scott (Moriarty in TV’s Sherlock) who acts intensely and incessantly for two hours. The rest of the cast each get their chance to enact various characters, most of whom suffer from contact with Paul, who thinks he can just use and then buy people off. Paul is the naïve child playing selfish games without realising he can hurt to the point of suicide.

The stage is on a slight slope, which works well for changing scenes, and yet inexplicitly fills up with water towards the end so that the characters slop about at the edges of puddles. By this point, some of the audience were leaving, not due to the excellent quality of the performers who carried on as if they really meant it, but at exasperation at the rush of new characters, scenarios and changes of writing styles at the latter end of the play.

There’s a lot of swearing, which is always enjoyable and funny, and the increasing sense of disorientation is perhaps deliberate, but overall it’s not a great night for theatre.

Birdland is on at the Royal Court Theatre from 3rd April to 31st May 2014, for further information or to book visit here.