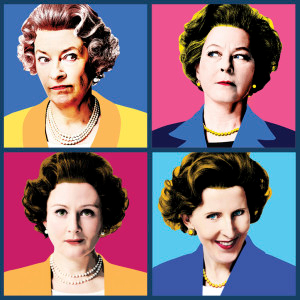 Handbagged at the Vaudeville | Theatre review

Handbagged transfers from the Tricycle Theatre to the Vaudeville Theatre on the Strand, just six months after its original opening. We’re presented with the Queen and the Iron Lady in discussion, with both ladies portrayed in the near-present and the past simultaneously. Moira Buffini’s writing is slick and witty, particularly with the interruptions of the maturer Q, played by the elastic faced Marion Bailey, and T (the powerful Stella Gonet). The eleven-year relationship of prime minister Margaret Thatcher and the Queen is described and discussed, with emphasis on major events and collaborations with other world leaders (clever multi roles by Neet Mohan and Jeff Rawle). Despite its hilarity — with Bailey’s perfect timing and expressions and Fenella Woolgar’s younger Mag’s physicality and matter-of-fact tone — the journey is very much educational. Unless you’re familiar with the political life of Thatcher, it is at times difficult to follow.

However, the writing accomodates this by bringing the actors out of character to address the audience about what should be presented and who should play what. Mohan’s first lady to Rawle’s President Regan is sublime.

Indhu Rubasingham directs with style and panache, complimented by a simplistic design by Richard Kent that frames and encompasses the action without fuss. As a theatrical piece, it’s funny and the performances are golden, yet the relevance of the piece is severely questionable. It doesn’t encourage discussion, it doesn’t explore anything new, but attacks a political involvement that ended in the 80s. Of course, the events that occurred are still having their repercussions today, but after plays like The Audience last year, haven’t we seen similar discussions play out before? A surprising choice for the impending summer season for the West End, it’ll be interesting to see whether its success will continue after its smaller scale production at the Tricycle.

Handbagged is on at the Vaudeville Theatre until 2nd August 2014, for further information or to book visit here.