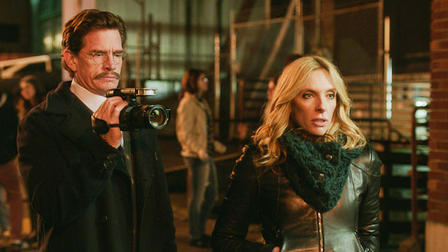 Toni Collette must decide between music and maturity in Seattle-based Lucky Them. Supported by Thomas Haden Church, rising actress Ahna O’Reilly and an unbilled A-list cameo, the comedy-drama questions the limitations of adolescent obsessions. Lucky Them follows Elle Klug, a respected music critic, in search of a disappeared cult musician and one-time lover. Abandoned before a show, hurts remain unhealed and questions unanswered. A decade later, Klug’s publisher wants an inside story about their relationship. While many believe the one-time rock star is dead, his former love holds out hope. While friend Charlotte is against the search, unlikely guest Charlie, intent on documenting the experience, offers to bankroll the manhunt.

Though versatility may be her shining attribute, Collete plays Klug with sophisticated simplicity. Her actions lack the contrived nature so often seen by high-list actors in low budget films. Though the conclusion is not eccentric for this genre, the “transformation” of Klug makes viewing worthwhile.

Haden Church and O’Reilly deserve notoriety as buttressing elements in Lucky Them. The former enacts a focused deadpan that adds comic sparks to duller moments in the film. O’Reilly, on the other hand, is coarsely compassionate. She never fails to admonish Klug, but always acts as her stalwart defender. Viewers not only look forward to O’Reilly’s presence during the film, but in subsequent productions as well.

Director Megan Griffiths explores a similar theme in Lucky Them as seen in previous efforts The Off Hours and Eden. The three films exhibit women ensnared in unwanted places, yet with the eventual ability to overcome the repressive force. Francine in The Off Hours and Eden in The Abduction of Eden, despite existing in different environments, face challenges akin to Klug. As Griffiths continues her foray into film, viewers hope this theme will continually develop.

The fate of Lucky Them is ambivalent. While the intent of the film is out of the ordinary, a romantic “dramedy” not centered around romance, the results are not extraordinary. Praise belongs to actor performances, but a festival film it will – and should – stay.

Lucky Them opens on April 21st at the Tribeca Film Festival, for further information visit here.