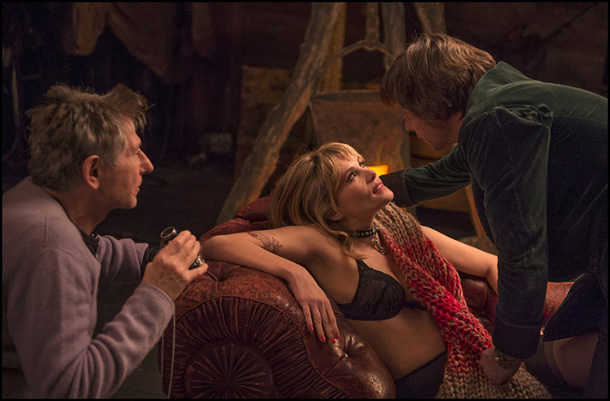 Always controversial Polish film-maker Roman Polanski focuses his 22nd production Venus in Fur on the origins of sadomasochism. Adapting the 19th century novel of the same name by Leopold von Sacher-Masoch (notice the last name) and employing French cinema’s Emmanuelle Seigneur and Mathieu Amalric, the work promises to be provocative. A thunderstorm in Paris pours overhead, guaranteeing a frightful commute home. After a frustrating day of auditions, theater director Thomas is anxious to return to his fiancée. While exiting the theater, a last-minute actress, Wanda, swoops in to provide her talents. Rigidly uninterested, Thomas attempts to resist the audition. Yet, after the first scene is over, an uncanny connection between character and actress has been established: the spontaneous reading becomes unstoppable.

In his previous works, Polanski is known to sequester his characters away from the world. Thomas and Wanda are no different. The run-down theater – including stage decor to recreate the 19th century atmosphere – is their prison. This isolated arena appropriately ascends to a fever pitch. Yet, Polanski asks, is their connection seduction or subservience? By the conclusion, the characters are pushed to their psychological limit – a shining characteristic in the best of Polanski’s cinema.

Venus in Fur is more gratifying than successful. Polanski gleans great performances from Seigneur and Amalric, but stumbles in the final act. Much like 2012’s Carnage, this is a fault in latter productions from the veteran director. While also thematically familiar to the previous work, the delicate balance of contemporary gender roles and certain lines propose a personal connection outside the fictive text. Theater director Thomas fears any association with his adaptation of the 19th century story. Naturally, his actions in the film suggest the contrary. Does the man behind the camera seek similar freedom in artistic efforts from his contemptible past? Regardless, despite the contemporary missteps and questionable ambitions, Polanski will always draw an audience.